Vote of confidence for Kenya in race to host championship 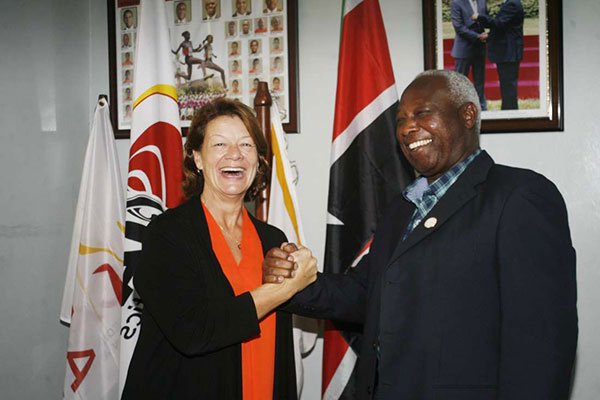 Vote of confidence for Kenya in race to host championship

Kenya is better placed to host the 2025 World Championships in athletics compared to other African countries, International Association of Athletics Federations (IAAF) Director of Communications Jackie Brock-Doyle has said.

Brock-Doyle noted that both events were sold out, with large number of fans turning out to watch the events whose organisation was world-class.

“I think it will be great when you look at the crowds that came to Under-18 Championships. That was only a youth championships yet it was full to capacity, with people being turned away.

There is real love for athletics in Kenya and we can only build on this moving forward,” Brock-Doyle said. “There is no reason why Kenya can’t host the championships. We can only keep our fingers crossed for 2025.”

Brock-Doyle said Kenya must improve its infrastructure and perhaps build a new stadium since Africa will probably have three or four countries bidding to host the 2025 World Championships.

Other countries interested in hosting the event are South Africa, Nigeria and Morocco.

The 2007 World Cross Country Championship in Mombasa registered a record turnout of 40,000 people while many fans were turned away during the World Under-18 Championship at the 60,000-seater Kasarani Stadium.

Brock-Doyle said European and African countries will be vying to host 2023 and 2025 World Championships.

“There have been talks about Africa being ready to host a world championships in 2025 and I hope that comes true,” said Brock-Doyle.

Brock-Doyle, who was in Kenya for the United Nations Conference on Environment, was speaking when she paid a courtesy call on Athletics Kenya president Jackson Tuwei at Riadha House, Nairobi.

Tuwei said AK is discussing with the government concerning hosting 2025 World Championships and 2020 World Under-20 Championships.

Brock-Doyle said IAAF will adopt Kenyan laws on the ban of plastics bags during its championships globally.

“What was fascinating during the conference was listening to programme around plastic bags and single-use plastics bags, a campaign which is the world’s first,” said Brock-Doyle.

“We shall explore how that type of campaign works by reducing plastics in some of our athletics events moving forward,” said Brock-Doyle.

Vote of confidence for Kenya in race to host championship Reviewed by samrack on December 8, 2017 .