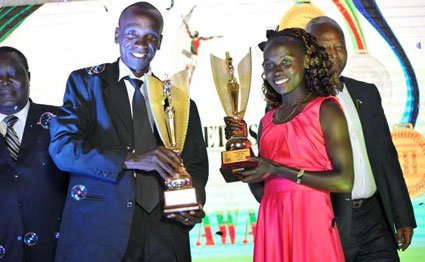 Cheruiyot, who also won silver in 10,000m at the Rio Olympic Games, edged out Olympic marathon champion Eliud Kipchoge and Paralympians Samuel Muchai and Nancy Koech to reclaim the overall title she last won in 2011.

The 33-year-old Cheruiyot, who had two medals from the 2012 London wrapped up her Rio outing with an Olympic record time of 14 minutes and 26.17 seconds in 5,000m, leading compatriot Hellen Obiri to a 1-2 finish. The Kenyans stunned pre-race favourite Almaz Ayana from Ethiopia to third.

Vivian Cheruiyot (right) arrives for the Sports Personality of the Year Awards (Soya) with her husband Kiprugut Kirui on January 19, 2017 at the Soya Gala at KICC. PHOTO | CHRIS OMOLLO |

The honours were a replica of the 2016 Athletics Kenya Athlete of the Year female awards.

Cheruiyot, who is the only other athlete to have won the women’s award twice after Catherine Ndereba (2004, 2005) and Janeth Jepkosgei (2006, 2007), received a glamorous trophy and Sh1 million prize money from chief guest running legend Haile Gebrselassie.

She will make her debut at the London Marathon in April.

Chepng’etich clocked 4:08.92 to beat Ethiopia’s Genzebe Dibaba in 4:10.27. Chepng’etich had lost the battle to Dibaba at last year’s World Championships where she settled for silver.

Chepng’etich broke the Kenyan 1,500m record twice, in Shanghai with a world leading and meet record 3:56.82 before improving the National Record with victory in Eugene in 3:56.41.

Sumgong, who had won the London Marathon, handed Kenya its maiden marathon victory at the Rio Summer Games, the two performances that saw her win the World Marathon Majors.

Kipchoge, the 2016 AK Athlete of the Year winner, extended his reign to Soya, bagging the Sportsman of the Year award, beating Olympic 3,000m steeplechase champion Conseslus Kipruto to second place.

Collins Injera celebrates his World Rugby Sevens Series 231st try at London Sevens on Saturday that made him the all-time top try scorer in the tournament. PHOTO | MARTIN SERAS | AFP

Kenya Sevens bagged the Team of the Year award, no doubt swaying the voting after their historic Singapore Sevens win in the World Rugby Series, beating SportPesa Premier League champions Tusker FC and Kenya Simbas 15 rugby team. It was the country’s first leg title in the history of the Series.

Muchai, who won two gold medals in gold in the T11 men’s 1500m and 5000m at the Rio Paralympics was declared Sportsman Living with a Disability, beating fellow Paralympian Henry Kirwa and National Wheelchair champion Peter Munuve to second and third respectively.

Koech, the only woman to win a medal at Rio Paralympics with silver in 1,500m T11, went for women’s top honours, beating Nelly Sile and Irene Cherono.

Kipyegon Bett celebrates after winning his semi-final to qualify for men’s 800m final at the World Under-20 Championships on July 23, 2016 at Zawisza Stadium, Bydgoszcz Poland. PHOTO | AYUMBA AYODI |

Telkom Orange hockey team tactician Jos Openda walked away with Coach of the Year gong while Philip Onyango received School Coach of the Year award after guiding Kaya Tiwi to regional and National titles. The school claimed School for the Year (Girls) award.