Video:Uhuru amazed by level of agricultural innovation in Israel 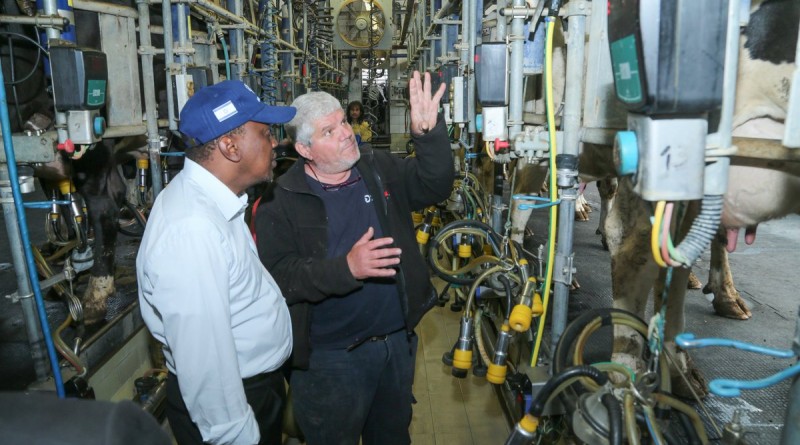 Amazed at the level of agricultural innovation in Israel despite the prevailing arid conditions in the country, President Uhuru Kenyatta has blamed Kenya’s obsession with politics for the stagnation of ambitious agricultural projects.

Uhuru amazed by level of agricultural innovation in Israel

The President said the experience of Israelis in harnessing harsh and dry lands to produce crops will be utilised to increase food production in Kenya.

The President said since 70 percent of Kenya’s land was arid, it was prudent to send more students to Israel besides those who are already studying in Israeli institutions.

He said a decision to send more students and open up more Israeli institutions to Kenyan learners was reached on Tuesday when he held a bilateral meeting with Prime Minister Benjamin Netanyahu.

President Kenyatta spoke when he visited a Kibbutz where more than 70 Kenyan students are learning new farming technologies.

President Kenyatta said the knowledge learnt by the students will be used to revolutionise agriculture in Kenya starting with the Galana-Kulalu Irrigation Scheme where the students will first apply their skills.

“A desert can truly be a paradise if we are committed. This place is drier than any part of Kenya but look at what they produce,” said President Kenyatta who was taken on a tour of organic tomato farms and a section of the Kibbutz for dairy cows.

He urged the students to take seriously the lessons they learn while in Israel because Kenya is waiting for their expertise. The President said the Galana-Kulalu scheme will be ready to absorb the students when the first group returns in a few months time.

President Kenyatta said the scheme would now have been productive were it not for the misplaced priorities of Kenyan politicians.

The President said Kenyan politicians have the habit of prioritizing personal and tribal competitions instead of putting the interest of the country before everything else.

The Galana-Kulalu scheme was delayed for more than three years by obstacles created by politicians.

President was accompanied by the Israeli minister for Agriculture and Rural Development, Uri Ariel, who said he wants the relationship between Kenya and his country deepened.

The President is on a 3-day State visit to Israel aimed at deepening the ties between the two countries.

On Tuesday President Kenyatta and Prime Minister signed an agreement paving the way for stronger collaboration in water and irrigation.

By PSCU
Video:Uhuru amazed by level of agricultural innovation in Israel Reviewed by samrack on February 24, 2016 .