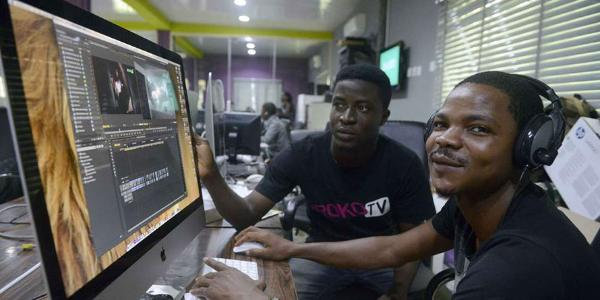 Video editors at the headquarters of Nigeria’s iROKOtv in Lagos: Video-on-demand services have been growing in Kenya. AFP PHOTO | FILE | PIUS UTOMI EKPEI

While this figure is comprehensive of both fibre-to-the-home and fibre-to-the-office, there has been a flurry of activity over the last one year as companies compete to connect residential properties.

Rising residential fibre connections have been associated with the entry of over-the-top content providers into Kenya.

The CA expects that video-on-demand will continue to drive fibre adoption and deeper penetration of data in Kenya.

“In future, more entertainment services such as Netflix will be delivered over broadband resulting in higher demand for broadband-based services which will likely foster the growth of fibre-optic services,” says the CA.

During the year to last September, the number of overall data subscriptions in Kenya grew 20.3 per cent from 25.7 million to 30.9 million.

Video-on-demand services have been growing in Kenya. Other companies that have a local presence include South Africa’s Showmax, Malysia-based iFlix, Nigeria’s iROKOtv and Amazon Prime Video.

Safaricom has been increasing its investments in fibre, establishing a home department that is primarily tasked with connecting residential properties.

Separately, Liquid Telecom earlier this year said it had connected 3,000 homes to its Hai fibre and following recent fundraising of Sh18.7 billion the company is expected to expand and densify its network.