(VIDEO) More Than Half of Gikomba Market Razed In Broad Daylight 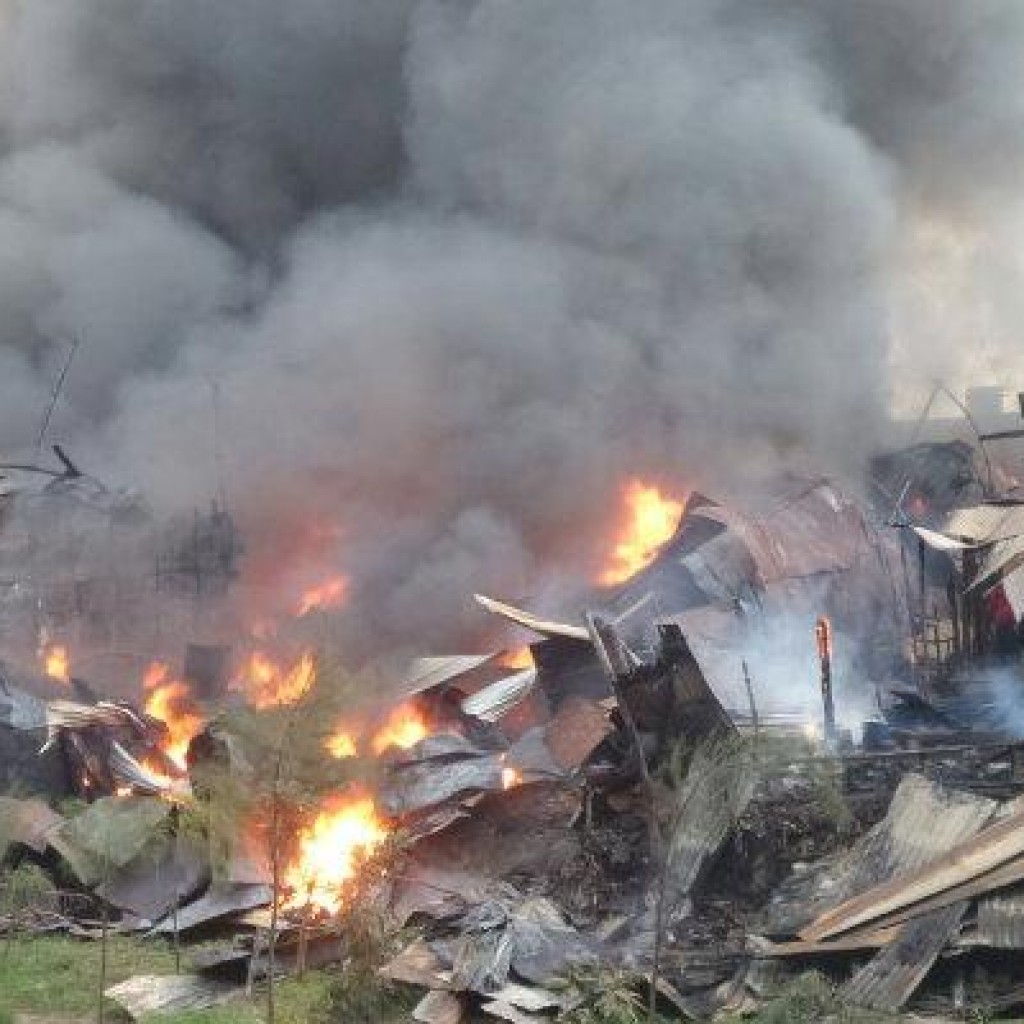 Thousands of traders in Nairobi’s Gikomba market were counting massive losses on Tuesday after a fierce fire razed more than half of the market.

The traders, some in tears and shocked beyond words, recalled the agonizing phone calls they received from their colleagues who heard that their businesses had been reduced to ashes by the fire that started after midnight.

“I received a phone call at about 3am. I was told our market was on fire. I came down here, I have lost my goods worth around Sh9 million. Containers of shoes, containers of clothes have all burnt down, I don’t know where people are going to start again,” Macharia Muia explained.

He described the fire as the worst tragedy to hit the market which is a central point of getting second hand goods especially shoes and clothes.

“For the last 10 years, we have never seen a fire like this one, this is the most destruction we have ever experienced,” he complained.

National Youth Council leader Tinega Damasen whose business was also damaged by the fire said he had lost everything that he had initiated using a loan from the National Youth Fund.

“I have a loan on youth fund I don’t know what to do. Young men have lost a lot and they had all taken loans,” he explained.

Their narrations were similar to the thousands of other traders who lost colossal amounts of money and property in the early morning fire. By 11am, smoke was still billowing in the otherwise busy market.

Though the response from the County Government of Nairobi was fast and commendable as noted by the traders, rescue efforts were slow due to poor accessibility.

There was confusion as traders tried to use carts to salvage what they could while fire fighting vehicles tried to make their way into the scene of fire.

According to authorities, the early morning tragedy left more than half of the market destroyed.

“I have never seen so much destruction and devastation. This is the worst fire that we have had in the history of Gikomba. It has seriously affected the economy. We have had more than five fires this year, but this one has affected almost 70 percent of the market,” Yusuf Hassan, Kamukunji MP said when he visited the affected traders.

The MP claimed that it was suspected arson pegged on business rivalry among traders in the market but urged for speedy investigations. He also complained that it was the fifth fire incident to affect the market.

It was only last week when another fire burnt down several businesses at the same market.

Nairobi Police Chief Benson Kibue said police had begun investigations into the inferno that reduced businesses worth millions of shillings to ashes. He said police had information that the fire originated from one store in the market but later spread very fast to most of the market.

“We are informed, and that is very reliable that the fire started from a store, that will form the basis of our investigations,” he said.

He also said police had arrested six individuals suspected of stealing while rescue efforts were ongoing.

(VIDEO) More Than Half of Gikomba Market Razed In Broad Daylight Reviewed by samrack on June 23, 2015 .

Thousands of traders in Nairobi’s Gikomba market were counting massive losses on Tuesday after a fierce fire razed more than half of the market. The traders, some in tears and shocked beyond words, recalled the agonizing phone calls they received from their colleagues who heard that their businesses had been reduced to ashes by the