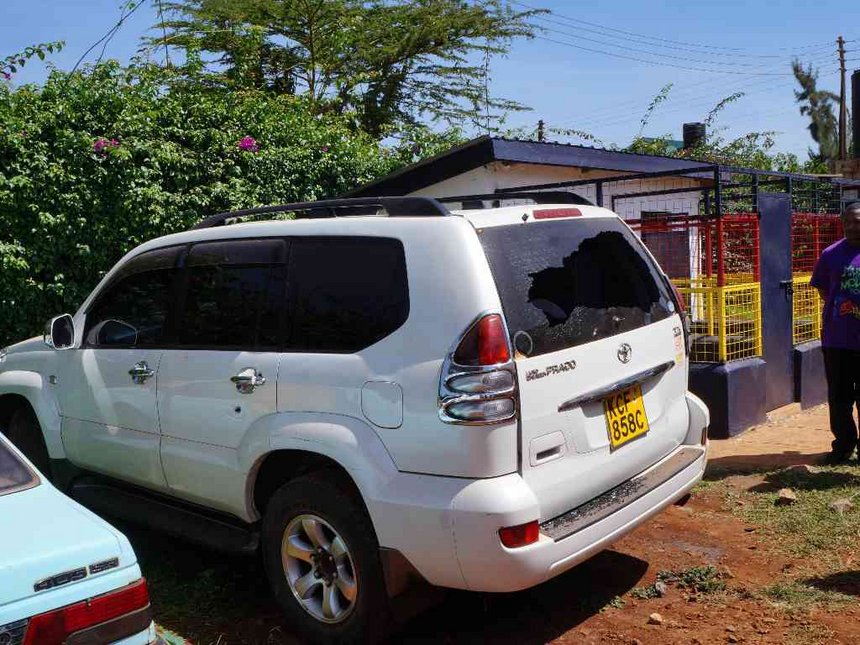 Kabete MP aspirant Charles Chege was reported missing after his car was found with two bullet holes near a dam in Gitaru area on Saturday.

Kabete OCPD Joseph Ongaya said they collected two spent cartridges from the place where the Toyota Prado was found.

He added that two mobile phones which were off were found in the car. They are believed to be Chege’s.

Ongaya said the bullet holes were on the back left door of the car, near the lock, and that the back windscreen had been smashed.

“We are investigating how it was smashed,” he said at his office adding they ruled out gunshots.

Ongaya said a resident who called King’eero police station reported hearing gunshots at about 3am.

Officers who were on patrol responded to the alert while those of the crime scene at the DCI visited the scene.

“When our officers arrived, they told us it was Chege’s vehicle and that no one was around. They said there were no blood stains,” Ongaya said.

The OCPD said the vehicle was towed to the station and that Chege’s driver was helping with investigations. No suspects have been arrested so far.

Ongaya urged residents to be patient while investigations are carried out. But they held demonstrations at major trading centres saying they had been preparing for Chege’s launch of his manifesto at Kanjeru stadium today.

The aspirant wants to succeed Ferdinand Waititu who is vying for the Kiambu Governor seat held by William Kabogo.

Some of the protesters lit bonfires on Gitaru-Wangige road using old tires and blocked it. Others took the protests to Wangige, Kanjeru, Uthiru, Nyanthuna and Ndumboini.

The people described Chege, popularly known as Chege Fresh, as an approachable, patient and caring politician.

“He is friendly and development-oriented. He has put up street lights in villages and trading centres,” said Michael Njoroge.

Nancy Waweru said: “We are so angered by how he disappeared. We want police to investigate and bring the attacker to book. We want to know what happened.”

Another group of Chege’s supporters demonstrated at the station. Officers urged them to remain calm and submit any helpful information.