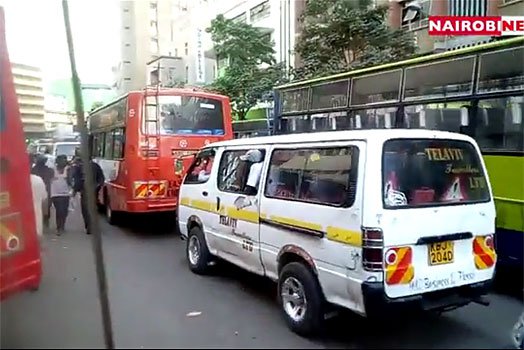 A chilling video has captured a gang of three people robbing a hapless woman, along Tom Mboya Street in Nairobi last Saturday, highlighting the growing insecurity that has hit parts of the city.

In the video, a woman was cornered from behind by the gang who after a brief confrontation vanish with her belongings behind the matatus parked by the road.

The clip was shot on Saturday, October 22 at around 4pm by a 23-year-old Kenyatta University student who has asked to remain anonymous for security reasons.

She is enrolled at the city campus and lives in Kiambu. Due to her schedule she frequents Tom Mboya and has to sit inside a matatu for a long time as she waits for it to fill up.

And over the last two months, the student says she has witnessed the gang – two men and one woman- violently rob pedestrians and motorists along Tom Mboya street.

She then decided to record one of the incident.

In an exclusive interview with Nairobi News, she said: “I was inside a Kiambu matatu at ‘Commercial’ just opposite Tuskys supermarket when I took this video. There is a gang of three, two men and a woman, which has been terrorizing passengers here.

“For the last two months, I have seen them operate in broad daylight, yet there is always a traffic policeman a few meters away. This time when I saw them I decided to take the video so something can be done about it.”

According to this eyewitness, this gang is very professional and masters at their craft.

They target cars, which have a single occupant and make away with the side mirrors or any other removable parts since they know the victim cannot alight go after them.

“There is a bank next to the Kiambu Stage and even they have had a few incidents,” she narrates.

“Their security personnel try to control the movement of the street kids along that route but a few weeks they retaliated and there was a commotion.”

Walking down on Tom Mboya Street to and from class, our eyewitness has on several occasions been approached by suspicious people selling cheap merchandise.

In her calculations, these goods were possibly stolen from the very same street.

“If I am just a student, and I have noticed all this, how come the police haven’t? Tom Mboya Street is very hazarders (sic) these days, you have to be careful.”

VIDEO CAPTURES DAYLIGHT ROBBERY ALONG TOM MBOYA STREET  By BONIFACE NYAGA A chilling video has captured a gang of three people robbing a hapless woman, along Tom Mboya Street in Nairobi last Saturday, highlighting the growing insecurity that has hit parts of the city. In the video, a woman was cornered from behind by the