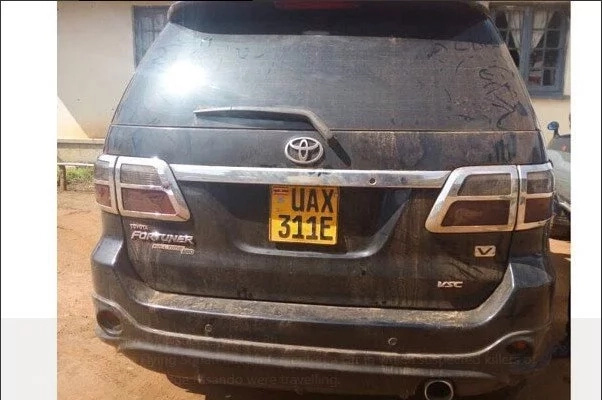 The vehicle believed to have been used by Msando’s killers. Photo: Crime Watch Nairobi

A car believed to have been used by people who killed IEBC ICT manager Chris Msando has been intercepted in Uganda – The car had Ugandan number plates as a decoy – Ugandan Flying squad officers also arrested the driver and two other people who are believed to be Chris Msando’s killers who were trying to flee A black Toyota Fortuner vehicle with Ugandan number plates which is believed to have been used by the killers of IEBC ICT manager Chris Msando has been nabbed in Uganda.Ugandan Flying Squad officers intercepted the vehicle with the supposed killers of Msando who were trying to flee. The vehicle was nabbed at Pabbo Sub-county, Amuru District in northern Uganda, on Friday,August 4, afternoon. The Ugandan flying squad officers arrested three suspects, a Kenyan national and two Ugandans who have been detained.The suspects have been identified as Mathew Butia ,a Kenyan national, and Mr Joseph Okongo and Moses Goloba both Ugandans.

The suspects are said to have entered Uganda through Malaba border post in Tororo District and were heading to Juba, the capital of South Sudan.According to fresh reports reaching our news desk, the Ugandan flying squad officers found a Kenyan number plate inside the vehicle which had Ugandan registration plate as a decoy.

Speaking about the new development, a top Ugandan police officer said the Kenyan number plate found in the vehicle is registered to a popular Kenyan politician.  the late Chris Msando was killed by unknown people who dumped his body, and that of his female friend at a thicket in Kikuyu.

The murder sparked heated debates in the country with countless people calling for an immediate probe. According to post-mortem results, the late Msando was killed by strangling, with his body bearing serious marks of torture. Install TUKO App To Read News For FREE The arrest Msando’s alleged killer in Uganda comes barely a week after he was murdered. The Kenyan government is still mum over the arrest. Keep it here for more on this as it unfolds.

Vehicle believed to have been used by Chris Msando’s killers intercepted in Uganda Reviewed by samrack on August 5, 2017 .