US pleased with Uhuru, Raila talks 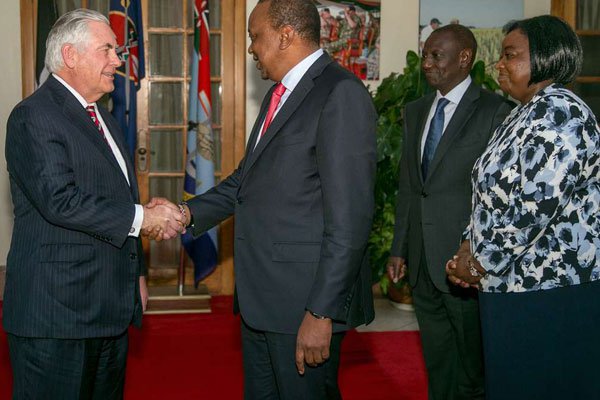 US pleased with Uhuru, Raila talks

The United States has welcomed the meeting between President Uhuru Kenyatta and National Super Alliance leader Raila Odinga, terming it a positive move towards healing the deep divisions and restoring democracy in Kenya.

At the same time, visiting Secretary of State Rex Tillerson criticised the government for banning live broadcasts, threats against the Judiciary and disregard of the rule of law.

“We were very pleased to see the two coming together. President Kenyatta and the opposition head showed great leadership in coming together to address the deep divisions,” Mr Tillerson said during a press briefing with his Kenyan counterpart Monica Juma.

He said the meeting was long overdue and would help the country move forward as one after the 2017 presidential elections.

Ms Juma pushed back against criticism of declining democratic space in Kenya.

According to the minister, the ban on live broadcast was a “one-off” incident because of security reasons “but which has been blown out of proportion”.

“The definition of democracy goes beyond the media. What is being referenced is a one-off incident and involves what is being investigated by the police,” she said.

“We bestowed upon ourselves a progressive Constitution to help us realise our objectives and this goes beyond the media. The democratic project in this country is on the right path.”

Soon after landing in Nairobi, Mr Tillerson held a meeting with President Kenyatta where they discussed security in the region, particularly the threat of al-Shabaab and the war in South Sudan.

On South Sudan, Mr Tillerson reiterated the US position that the arms embargo be respected.

Kenya, which has been accused of supplying weapons to one of the two sides in the bloody conflict, denied any involvement.

“We cannot be guaranteeing peace in South Sudan while at the same time exacerbating the war,” Ms Juma said, adding that Kenya was among South Sudan neighbours which continued to bear the burden of the war “as refugees pour into our country”.

Mr Tillerson arrived in Nairobi on Friday afternoon as part of his five African nation tour, which has seen him in Chad, Ethiopia and Djibouti.

His next stop will be Nigeria. The US Secretary of State will be in the country until Monday.

US pleased with Uhuru, Raila talks Reviewed by samrack on March 9, 2018 .