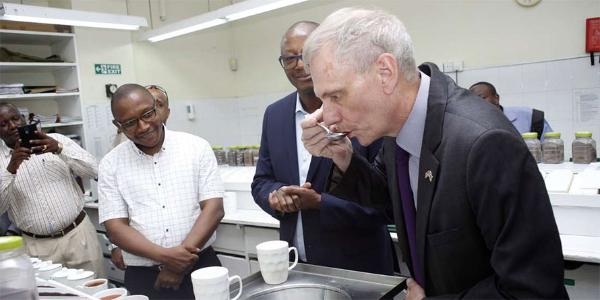 The United States has unveiled a Sh11.5 billion programme to assist Kenyan farmers by providing them with innovations and technologies in dairy, livestock, root and drought-tolerant crops.

Dubbed Feed the Future Kenya Country Plan under the US Global Food Security Strategy, the programme aims to reduce poverty and improve the ability of local farmers and pastoralists to cope with economic shocks such as drought and subsequently boost their incomes and nutrition status.

Kenya is one of 12 countries that had earlier been selected as the focus of the second phase of the American initiative to combat food insecurity.

Speaking during the launch of the programme yesterday in Nairobi, outgoing US ambassador to Kenya Robert Godec  said the programme would focus on promoting long-term sustainable development that would help communities resist the shocks that are brought on by drought and other natural disasters.

“We helped them grow better crops and increase milk production, and then get those products to market.  All told, working with partners we leveraged over Sh22 billion in new assistance to the agriculture sector.”

Kenya was in the first phase of the “Feed the Future” programme which was launched in 2009.

Under the initiative, USAid reports that 1.1 million farmers used new technologies for the first time in 2016.

The Americans also say that the plan has increased US exports to partner states by Sh103 billion ($1 billion).

Other African countries targeted for the second phase of the programme are Ethiopia, Ghana, Mali, Niger, Nigeria, Senegal and Uganda.