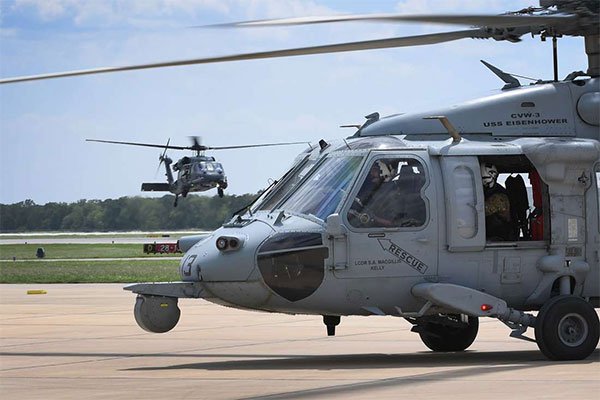 Two MH-60S Sea Hawk helicopters assigned to Helicopter Sea Combat Squadron (HSC) 7 return to College Station, Texas, after conducting search and rescue operations over the areas affected by Hurricane Harvey on August 30, 2017. The US has found nothing wrong with the Kenya arms deal that congress approved earlier in the year. PHOTO | ERNEST R. SCOTT | AFP

A US watchdog agency said on Tuesday that Kenya’s pending $418 million purchase of combat aircraft — the biggest weapons deal in the country’s history — conforms with US law governing the Foreign Military Sales (FMS) programme.

A five-month review by the Government Accountability Office, the US Congress’ investigative arm, concluded that “the events related to this FMS transaction are consistent with the standard FMS process.”

The agency’s 11-page report also notes that the US Air Force, which is overseeing the proposed deal, “determined that Kenya made a reasonable choice when it selected the AT-802L aircraft.”

US officials determined that “they did not have any reason to believe that Kenya improperly selected the AT-802L.”

Those findings drew a sharply negative response on Wednesday from US Congressman Ted Budd, a leading critic of the deal who had requested the investigation by the Government Accountability Office.

“A report on a Kenyan arms sale that did not involve speaking to Kenyan officials is virtually useless,” Congressman Budd said.

The agency said it reviewed all key documents related to the deal and interviewed officials in four US agencies, but it does not cite any direct communications with the Kenyan government.

Mr Budd pledged to continue monitoring the deal, which is also being reviewed by a US Congress committee that has yet to report its findings.

But the sale has proved controversial due to Mr Budd’s suggestion that the Kenyan government may not have acted in its own best interests in specifying that it wanted to buy up a dozen of the AT-802L planes.

These weaponised crop duster aircraft, intended for use in Somalia against al-Shabaab, are manufactured by Texas-based Air Tractor and would be sold to Kenya via a contract with New York-based L3 Technologies.

Republican Congressman Budd claims that the AT-802L would not meet Kenya’s stated objectives.

And he argues that Iomax, a company based in his own district in North Carolina, produces a type of aircraft that would better suit Kenya’s needs and would cost $130 million less than the Air Tractor planes being offered through L3.

Kenya’s deal with Air Tractor and L3, first mooted in December 2015 and originally set for action by June of this year, however, it has not been finalised because Kenyan officials had asked for their decision to be deferred until after the August 8 elections.

The US Air Force agreed to Kenya’s request and set a new deadline of September 16 for acceptance or rejection of the deal.

The congressional watchdog agency report does not indicate whether the Kenyan government will request a further extension as a result of the Supreme Court’s nullification of the August presidential election.

The agency’s report makes clear that the US government looks favourably upon Kenya as a potential customer.

US officials view Kenya as “a strong regional partner and leader that undertakes critical operations against the al-Qaeda-linked militant group, al-Shabaab, and contributes troops to a regional alliance combating terrorism in Somalia,” the report says.

It notes that “the United States has been building a relationship with Kenya via the FMS programme for more than 40 years.”

Kenya seeks to buy the AT-802L aircraft because its aging fleet of F-5 fighter planes “are not designed to support the air-to-ground missions that the anti-terrorism efforts entail,” the watchdog agency says. The F-5s fly too fast to serve those purposes, the report observes.

Kenyan officials acted with due diligence before entering into the tentative agreement with Air Tractor and L3, the US agency suggests.

It cites other US agencies’ reports that Kenya conducted its own market research, which involved attending air shows and consulting with other countries, the report recounts.

A US government security official based in Nairobi told the congressional monitors that the deputy commander of the Kenyan Air Force had advocated for purchase of the At-802L due to “its simplicity of use, ease of maintenance and long loiter time.” That term refers to the amount of time a military plane can remain above a target.

The report also defends the process whereby Air Tractor and L3 received US clearance for the deal even though competitive offers were not solicited.

The US Defence Department told congressional investigators that “foreign customers need not provide a rationale for their sole-source contracting requests.”

“The US government does not generally investigate circumstances behind foreign purchasers’ requests to use sole-source contracting as long as US government officials are not aware of any indication that such requests violate US law or ethical business practices,” the report adds.

But Tuesday’s report makes no mention of the Iomax aircraft touted by Congressman Budd as a cheaper, superior and combat-tested alternative to the AT-802L.

Expressing chagrin over the agency’s report, Mr Budd said on Wednesday that he plans to further examine “why the US contracting system would steer our allies in Kenya towards a contract that is inflated by $130 million for an aircraft that has never flown in combat.”

Two MH-60S Sea Hawk helicopters assigned to Helicopter Sea Combat Squadron (HSC) 7 return to College Station, Texas, after conducting search and rescue operations over the areas affected by Hurricane Harvey on August 30, 2017. The US has found nothing wrong with the Kenya arms deal that congress approved earlier in the year. PHOTO |