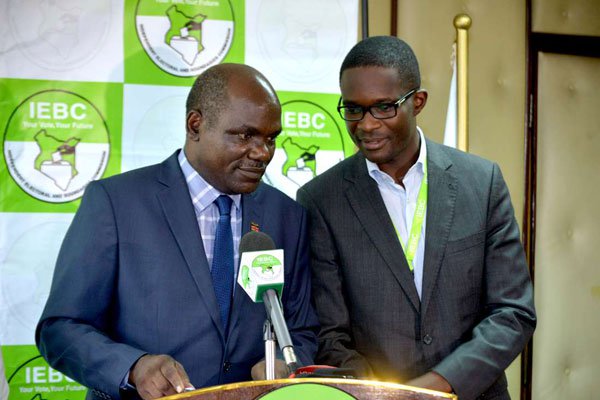 Four IEBC commissioners yesterday disowned a memo from chairman Wafula Chebukati blaming chief executive Ezra Chiloba for the systemic flaws in the August 8 General Election, revealing the extent of turmoil and infighting within the agency.

In the explosive memo, which was leaked to the media, Mr Chebukati directs Mr Chiloba to explain why some election result forms lacked security features, explain the purchase of satellite phones that never worked and why hundreds of polling stations did not send results of the presidential election to the national tallying centre.

He also demands an explanation on how an account created in his name was used to log into the elections management system thousands of times.

The latest development appeared to cast doubts on the credibility of the agency to organise repeat presidential elections scheduled for October 17.

The five who disowned the memo on the grounds that the commission had not met as a plenary to discuss the issues at the core of the annulled poll are vice-chairman Consolata Nkatha Maina, Yakub Guliye, Paul Kurgat, Boya Molu and Margaret Mwachanya.

It was the first public display of disunity at the top of the electoral agency, with only Roselyn Akombe taking sides with Mr Chebukati.

The memo is dated Tuesday, September 5, the same day Mr Chebukati set up a seven-member team to handle the fresh presidential election scheduled for October 17.

It has since emerged that senior officials at the electoral agency had refused to resign over their role in the annulled presidential poll, forcing Mr Chebukati to appoint his own team as the constitutionally mandated returning officer for the presidential election.

The leakage of the memo is likely to raise temperatures at the organisation and demonstrate the lack of harmony between the chairman and the chief executive, two crucial cogs in the machinery of one of Kenya’s most watched public institutions.

The three-page memo also contained questions about the use of a “porous file server,” voters who were identified manually, hundreds of polling stations which had an equal number of rejected votes and registered voters and why location features on some gadgets were switched off three days to the elections.

It was not clear last evening whether the Mr Chiloba had responded to the memo but an insider at the commission said the questions raised were technical and would need a response from several directorates.

One of the insiders pointedly asked: “Was the memo prepared for purposes of leaking it?”

On Thursday evening, the five commissioners said in a press statement that the memo’s contents were not discussed or sanctioned by the rest of the commission and that they had come to know of it through media reports “like everyone else.”

They said: “A quick perusal of the memo shows that the allegations are based on some report or information that has not been brought to the attention of the commission. Most of the issues raised are not factual and could easily mislead if taken out of context.”

They said the secretariat would review the issues raised and prepare responses to be presented to the commission. The five sought to assure the country that preparations for the fresh elections are on course.

“Our commitment is to ensure that a credible process is held in line with the principles enunciated by the Supreme Court in its brief judgment. We invite all Kenyans to stand by the commission as it carries out this mandate,” they said.

But in a new twist, one commissioner, Dr Kurgat, has distanced himself from the statement by his colleagues.

“I spent the whole of this afternoon with Bishop Alfred Rotich only to find a statement that bears my name. How could I have signed it when I had not even seen it?” Dr Kurgat, the former Kenyan ambassador to Russia, asked.

Dr Kurgat warned that the escalation of the matter, which has now played out in the open, will hurt the commission’s credibility and asked his colleagues to use internal mechanisms to solve the impasse.

Later in the evening, however, Dr Kurgat retracted his statement disowning the joint statement. He told the Nation that the statement carried the “correct and joint position” on the memo by Mr Chebukati.

In the memo, the chairman took issue with a message Mr Chiloba wrote to staff on the same day the Supreme Court annulled the result of the presidential election in which he asked them to be strong and to prepare for another poll, saying it “fails to appreciate the grave indictment by the judges.”

Among allegations similar to those in a report by the National Super Alliance after a scrutiny of IEBC’s systems was that Mr Chebukati’s password had been used to make more than 9,000 changes in the system.

Mr Chebukati said a Mr Paul Mugo and a Mr Boniface Wamae had, under instructions from ICT director James Muhati, told his office about an account created in his name without his knowledge or permission.

“This account was used to undertake over 9,934 transactions. I direct that you take immediate action against these officers  and report back by close of business today,” Mr Chebukati said in his memo.

Mr Chiloba was also taken to task over allegations that the commission’s servers — where electronic information is stored — were prone to mismanagement.

He also demanded that the chief executive, who heads the secretariat, explain the circumstances in which more than 10,366 polling stations with 4.6 million voters sent text results without the accompanying Forms 34A.

The chairman, however, suggested that the decision to use the satellite phones would also not have been a solution as “none of these worked.”

Ironically, in his replies to the Supreme Court petition in which he was named as the second respondent Mr Chebukati issued a robust defence of the manner in which the election was conducted and the results declared.

He told the court the commission had done a stellar job despite the challenges arising from the many cases filed against it and ensured that the election was conducted exceptionally well.

Share thisFacebookTwitterPinterestEmailWhatsAppIEBC fallout as Chebukati memo disowned Four IEBC commissioners yesterday disowned a memo from chairman Wafula Chebukati blaming chief executive Ezra Chiloba for the systemic flaws in the August 8 General Election, revealing the extent of turmoil and infighting within the agency. In the explosive memo, which was leaked to the media, Mr Chebukati