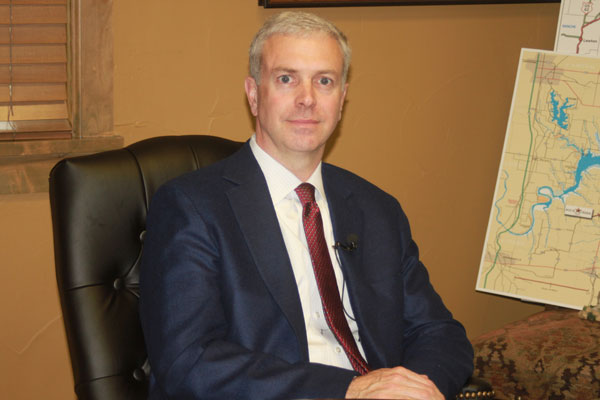 Double Diamond Vice President of Marketing, Stephen Miller. The US based firm is seeking to tap into the Kenyan market. PHOTO | COURTESY

A leading American company specializing in the acquisition, management, marketing and construction of some of the most sort after upscale resort facilities in the US has announced plans to introduce its products to the Kenyan market.

The move, said to have been inspired largely by an unusually big number of Kenyans living in the US who have purchased some of the company’s products will see some middle income Kenyan earners have a stab at owning property in the US.

Double Diamond, a Texas based developer of residential golf communities and residential homes is set to host a sponsored information dinner in Nairobi at the Hotel Emerald on April 15.

During the dinner event, the company will unveil a wide range of products mostly in real estate and membership in an exclusive resort club with a long list of indoor and outdoor facilities.

Apart from the Eagle Rock Resort located at the Blue Mountains in Pennsylvania, the company also runs Lost Lake Resort in Forestburgh, New York, Rock Creek at Lake Texoma, the Cliffs Resort at Possum Kingdom lake, the Retreat at Cleburne and White Bluff Resort all in Texas.

Prior to the dinner event set for Friday evening, it is believed that an advance team of the company’s top marketing executives will be in Nairobi beginning April 11, giving out free tickets and information packages.

Confirming the Nairobi meeting in an exclusive interview with the Daily Nation in Dallas, Texas over the weekend, the company’s Vice President of Marketing, Stephen Miller, said the move was a direct response to requests by Kenyans living in the US that the company introduces its products to Kenyans.

“Most of our Kenyan clients, who apparently constitute a very sizable group, have requested us to go to Nairobi and introduce our products to their friends and families and since we basically rely on a referral program, we want to give our customers who live in Kenya an opportunity to introduce their friends and relatives to our products,” he said.

It is estimated that more than 400 Kenyans living in the US have already bought lots (plots) mostly in Eagle Rock Resort located in Hazleton, Pennsylvania.

It is also believed that more 150 Kenyans in Kenya already own property in either one of Double Diamond’s six resorts located in Pennsylvania, Texas, or New York.

Most of the Kenyans at home who managed to buy property in these locations did so during their visit to the US who were introduced to the program by their Kenyan American hosts.

“Kenyans love to share their prosperity with their people that is why this program is very popular among us. So, we want to do the same in Kenya and that is why we are going there,” said David Kizito Bulindah who is coordinating the Kenyan event.

Mr Miller said based on past experience, Kenyans are more interested in buying lots (plots) that start at quarter an acre.

“Though we have other things like sell of houses and condos, what we will display in Nairobi are basically lots. And the good thing, one is not required to build immediately,” he said.

Asked to say if those who buy lots will be guaranteed visas to visit the US, Mr Miller said the company has already notified the US embassy in Nairobi.

US firm seeks entry to Kenyan market after success with Kenyans in diaspora Reviewed by samrack on April 17, 2016 .

Share thisFacebookTwitterPinterestEmailWhatsAppDouble Diamond Vice President of Marketing, Stephen Miller. The US based firm is seeking to tap into the Kenyan market. PHOTO | COURTESY US firm seeks entry to Kenyan market after success with Kenyans in diaspora By CHRIS WAMALWA A leading American company specializing in the acquisition, management, marketing and construction of some of