US blames corruption for slowing down foreign investments in Kenya 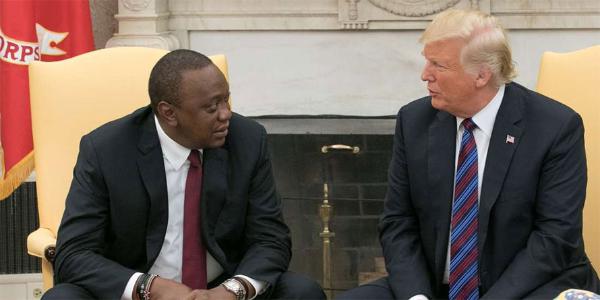 President Uhuru Kenyatta with his US counterpart Donald Trump at the White House in Washington DC in August last year. FILE PHOTO | NMG

US blames corruption for slowing down foreign investments in Kenya

Kenya is steadily enhancing its attractiveness to international investors, but “endemic” corruption slows the flow of foreign capital into the country’s economy, the US State Department said on Thursday.

This generally positive but guarded appraisal is presented in the Kenya section of a set of “Investment Climate Statements” that assess receptivity to foreign investment in more than 170 countries.

Prepared by economic officers in US embassies around the world, the comprehensive statements are intended to help guide investment decisions by US companies.

“Kenya has a positive investment climate that has made it attractive to international firms seeking a location for regional or pan-African operations,” the State Department declares at the outset of its review of Kenya’s economic, political and security status.

The statement notes substantial improvement in Kenya’s ranking in the World Bank’s global report on the comparative ease of doing business.

Passage of tax and finance laws and other “broad business reforms” on the part of Kenya are cited as well.

“Kenya’s macroeconomic fundamentals remain among the strongest in Africa, with five to six per cent GDP growth over the past five years, six to eight per cent inflation, improving infrastructure, and strong consumer demand from a growing middle class,” the statement adds.

“Kenya’s capital markets are the deepest and most sophisticated in East Africa,” the US says. “The Kenyan capital market has grown rapidly in recent years and has also exhibited strong capital raising capacity.”

Investors are warned, however, that corruption remains deeply rooted in Kenya’s society and economy.

“There are many reports that corruption often influences the outcomes of government tenders, and US firms have had limited success bidding on public procurements,” the statement points out.

The assessment makes note of President Uhuru Kenyatta’s announced campaign against corruption, and finds that “Kenya’s anti-corruption agencies now appear to be coordinating more effectively.”
“But no high-level officials were successfully prosecuted and convicted for corruption in 2018,” the statement points out.

Property rights in Kenya are framed as a source of concern for potential US investors.

“The cumbersome and opaque process required to acquire land raises concerns about security of title, particularly given past abuses relating to the distribution and redistribution of public land,” the State Department observes.

Potential investors are further cautioned that “if property legally purchased remains unoccupied, the property ownership can revert to other occupiers, including squatters.”

Enforcement of intellectual property rights in Kenya is marred by corruption, the statement adds, pointing to failures to collect penalties from law violators and to impound imports of counterfeit goods.
Kenya’s vulnerability to terrorist attacks is also cited.

US businesses considering starting operations in Kenya are told they will find a large pool of available workers, including highly-qualified professionals.

President Kenyatta’s meeting with President Trump in Washington a year ago is said to have made US companies more eager to establish or expand their business presence in Kenya.

Source: Daily Nation
US blames corruption for slowing down foreign investments in Kenya Reviewed by samrack on July 14, 2019 .

Share thisFacebookTwitterPinterestEmailWhatsAppPresident Uhuru Kenyatta with his US counterpart Donald Trump at the White House in Washington DC in August last year. FILE PHOTO | NMG US blames corruption for slowing down foreign investments in Kenya Kenya is steadily enhancing its attractiveness to international investors, but “endemic” corruption slows the flow of foreign capital into the