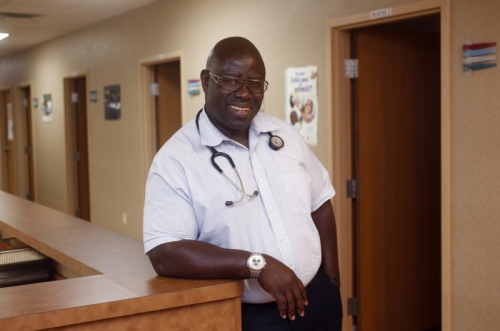 Dr. Bonyo S. Bonyo feels like he has two homes.

The first is Akron, where he lives with his wife, Sharon, and six children and runs his family medical practice on Vernon Odom Boulevard.

The second is Masara — the village in western Kenya where he was born, where his extended family lives, and where he made it his mission to provide health care almost 20 years ago.

To continue fueling that mission, Bonyo is holding a fundraiser to celebrate the 20th anniversary of his nonprofit organization, Bonyo’s Kenya Mission, at Northside Courtyard by Marriott on Saturday.

Bonyo’s native village, freckled with clusters of mud huts, survives on its agriculture.

“We grew up poor but happy with strong familial relationships. In about a 40-mile radius, we were all related in one way or another,” Bonyo said. “That’s what makes it so fun. You’re never alone.”

When Bonyo was about 8, his sister died from dehydration at just 9 months old.

“That’s not unusual where I come from,” Bonyo said. “That’s kind of one of the things that made me go into medicine, to prevent senseless deaths.”

Determined to work in the medical field, he walked an hour and a half each day to attend school as a child and earned the grades to attend a Catholic boarding school for free.

In the early 1990s, Bonyo raised enough money to attend college in the U.S., but he made a promise to return to Kenya and provide health care that is badly needed in the area.

He earned his medical degree from Ohio University Heritage College of Osteopathic Medicine. He collaborated with other medical students there, and together they formed the Student Health Assistance Rural Experience (SHARE) Kenya program in 1995.

The students took trips to Kenya where they set up makeshift clinics underneath the trees and treated anyone who needed it.

“One of his dreams was to not only diagnose problems, but to be able to treat them there,” said Dr. Sandy Deveny, who has worked with Bonyo since the late ’90s. “He’s just so passionate about getting health care and education into an area that lacked it.”

Bonyo’s dream came to fruition in 2006 when his organization received enough private donations to build a clean water well and permanent clinic in Masara. Bonyo built the clinic on land his grandmother left him and he named it the Mama Pilista Bonyo Memorial Health Center after his mother. That year, SHARE Kenya officially became the nonprofit CARE KENYA Inc., which was later renamed BKM.

While working to build a permanent home for his mission in Kenya, Bonyo established his own medical practice in Akron in 2001. There, he currently provides medical care to people of all economic statuses, many of whom are otherwise underserved. Bonyo also works with agencies in Akron to provide refugees with health care.

“Whether they have insurance or not, we don’t turn them away,” Bonyo said. “At the end of the day, I feel good about it.”

While Bonyo is in Akron, several nurses work full time at the clinic in Kenya to provide in- and outpatient health care at all hours of the day. They provide treatment for anything from wound care and dehydration to more serious conditions such as malaria and HIV/AIDS.

“We do everything we can for the people there,” Bonyo said. “It’s kind of amazing the changes I’ve seen around there.”

Bonyo travels to Kenya at least three times a year with teams of volunteers. Some are students from the Kansas City University of Medicine and Biosciences, where he has developed a partnership. Others are his wife and children, or simply a group of people who have volunteered on their own terms.

“Many wait for the American doctors and nurses to come,” said Linda Criss, the president of the board at BKM. “Some wait for months.”

The waiting doesn’t end there. Bonyo’s team treats anywhere from 300 to 500 patients a day, seeing wait times as long as eight hours.

“People wait for hours and nobody complains,” Bonyo said. “We work until everybody is seen.”

In addition to those hundreds, Bonyo is also the primary physician for President Barack Obama’s grandmother, Sarah Onyango Obama, who resides in Kenya.

BKM’s outreach in Kenya extends further than the clinic. Deveny runs its child sponsorship program out of Colorado, which currently funds education for about 70 children in the village. The team has made many other smaller outreach efforts to improve the way of life overall, including starting a fluoride program to provide dental hygiene and donating computers to schools.

BKM is currently working on introducing solar energy to the village and building a hostel so the doctors can reside closer to the clinic.

BKM’s 20th anniversary celebration will feature a silent auction that will include a drum signed by Ringo Starr, a cash bar and both Kenyan and American food. For more information on the event, mission or child sponsorships, visit www.bonyoskenyamission.org.

US-Based Kenyan Doctor Celebrates Work in Ohio and Kenya [VIDEO] Reviewed by samrack on May 23, 2016 .

Share thisFacebookTwitterPinterestEmailWhatsAppUS-Based Kenyan Doctor Celebrates Work in Ohio and Kenya [VIDEO] Dr. Bonyo S. Bonyo feels like he has two homes. The first is Akron, where he lives with his wife, Sharon, and six children and runs his family medical practice on Vernon Odom Boulevard. The second is Masara — the village in western Kenya where he