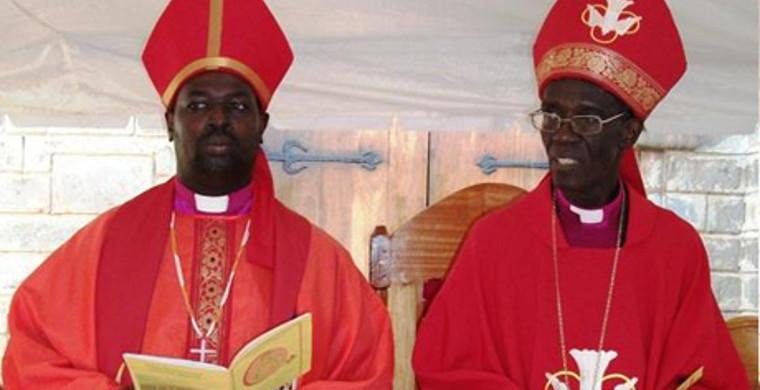 The Rt. Rev. Jackson Ole Sapit, 52, was elected this week as the 6th Archbishop of the Anglican Church of Kenya and Bishop of the Diocese of All Saints’ Cathedral, Nairobi.

He is orthodox, able and enthusiastic about GAFCON, and received accolades from Archbishop Peter Jensen, GAFCON General Secretary and ACNA Archbishop, Foley Beach. “We thank God for the gifts that Archbishop elect Sapit brings to his Church for this new season of its life and as we assure him of our prayers, we look forward to the Anglican Church of Kenya’s continued fellowship in the GAFCON family,” wrote Jensen.

ACNA Archbishop Foley Beach weighed in, saying, “I am delighted to hear the good news of this election. I congratulate Bishop Ole Sapit on this new calling and look forward to serving with him on the GAFCON Primates’ Council. He and his family are in my prayers as they make this important transition in their lives.”

The incoming primate was elected by an Electoral College of 191 delegates from the 38 episcopal Dioceses from across the country. The Archbishop-elect was nominated from among five other equally able and competent candidates. They include: Julius Wanyoike, Joel Waweru, Moses Masamba, James Ochiel and Lawrence Dena.

Less well known is the behind the scenes manipulation by the Archbishop of Canterbury, Justin Welby, and Bishop Josiah Idouw-Fearon, Secretary General of the Anglican Consultative Council of the Anglican Communion Office in this election.

They had invested heavily in Bishop Joel Waweru, who has been involved in the Indaba ‘Bishops in Dialogue’ meetings for a number of years, and who publicly defied his Archbishop Eliud Wabukala when, along with a delegation of other bishops, he attended the liberally sponsored and Western funded ACC-16 meeting in Lusaka.

Kenyan Archbishop Eliud Wabukala had written to his province and friends saying that a delegation from his province would attend the ACC-16 in Lusaka, despite his public statements to the contrary and his own personal direction to them.

“I am sorry to have to inform you that the Anglican Church of Kenya delegation to ACC-16 have decided to attend. The leader of the delegation is Bishop Joel Waweru who has been involved in the Indaba ‘Bishops in Dialogue’ meetings for a number of years.”

Wabukala said they represented themselves, and not the Anglican Church of Kenya.

“Waweru was the key player in the strategy of the ABC/ACO to detach Kenya from GAFCON in this election,” a senior member of the Kenyan clergy, told VOL.

Had Waweru won, there is every indication that he would have pulled Kenya out of GAFCON, VOL was told.

This is not the first time that Western liberals have tried to influence African elections.

It has been alleged that The Episcopal Church had poured hundreds of thousands of dollars into the Tanzania election, which elected Bishop Jacob Chimeledya by just three votes on the third ballot.

The complaint asked the House to annul the election, and to remove from their offices the Synod’s General Secretary, Dr. Dickson Chilongani, and its Registrar, Prof. Palamagamba Kabudi. It alleges that the election had been rigged by means of “walk around” money to the tune of $50,000, spread among those who voted for Chimeledya, and that the money came from a source within The Episcopal Church (USA).

However, supporters of Bishop Chimeledya charged that it was Archbishop Mokiwa and his followers who used American money to try to influence the election. The attempt failed.

Following the election, the general secretary of the Anglican Church of Tanzania, The Rev. Canon Dickson Chilongani denied the charges of voter rigging, calling it “speculation and gossip” on the Internet surrounding the election.

The Episcopal Church’s heavy financial hand over the years has been most noticeably successful in the Anglican Church of Southern Africa (ACSA), which has seen millions of dollars sent in to prop up the only Anglican province on African soil to totally support the pansexual direction of TEC.

Over the years, TEC and Trinity Wall Street’s money has been used extensively in developing the Council of Anglican Provinces of Africa (CAPA), with the sole aim of undermining orthodox African provinces, many of which have poor and starving people in need of assistance.

TEC and other liberal Western Anglican provinces have a deep vested interest in breaking the back of GAFCON, and they know that if they can infiltrate any of the ‘big four’ provinces — Nigeria, Kenya, Uganda and Rwanda — who make up some 70% of the Anglican Communion’s active, practicing Anglicans, they can effectively turn the Anglican Communion in their pansexual direction. To date they have not been successful. Tanzania recently joined GAFCON.

Following the meeting of Primates in January in Canterbury, TEC Presiding Bishop Michael Curry bemoaned the outcome of the meeting and said “it may be part of our vocation to help the Communion and to help many others to grow in a direction where we can realize and live the love that God has for all of us.” He believes that Western cultural values on homosexuality, aided and abetted by U.S President Barack Obama, will work to his advantage.

Many viewed his words as a not so oblique reference to his plans to further influence and push TEC’s pansexual agenda on to African provinces, with the help of his Church’s seemingly bottomless pit of “mission” funds.

Op-ed:KENYA New Archbishop will be GAFCON Primate Reviewed by samrack on May 22, 2016 .

Op-ed KENYA: New Archbishop will be GAFCON Primate By David W. Virtue DD www.virtueonline.org May 22, 2016 The Rt. Rev. Jackson Ole Sapit, 52, was elected this week as the 6th Archbishop of the Anglican Church of Kenya and Bishop of the Diocese of All Saints’ Cathedral, Nairobi. He is orthodox, able and enthusiastic about GAFCON,