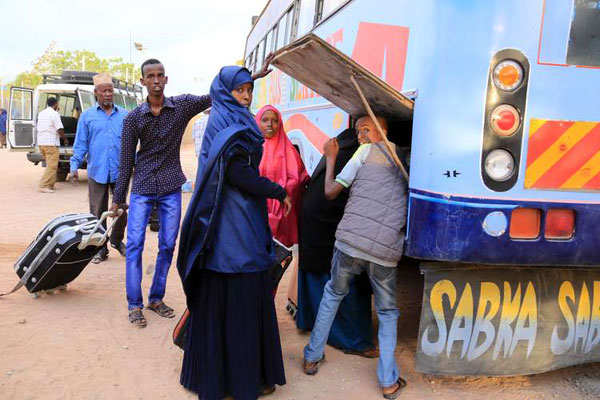 Not too long ago, a convoy of five buses drove into Dadaab Airstrip, raising a great cloud of dust. They were ferrying 417 refugees who had volunteered to go back home to Somalia months before the May 2017 deadline given by the Kenyan Government.

The refugees had woken up at the crack of dawn, determined not to miss the buses that would take them home, a place most of them left six years ago due to a raging drought that killed thousands.

Others had been refugees for over 25 years, having fled the fighting that erupted in their country in 1991.

This latest cohort of returnees had been picked up at Dagahaley, one of five camps that make up the Dadaab complex.

The airstrip was just a stopover to collect the $120 (Sh12,000) resettlement money provided by aid agencies and food and blanket rations packed in small bags to give them a softer landing in Somalia.

From the airstrip, the next stop would be the border town of Liboi, from where they would cross into Somalia. The group would then be driven inland to the town of Doble, where the United Nations High Commissioner for Refugees (UNHCR) would officially hand them over to the Somali Government.

From that point, they would cease to be refugees and the responsibility of the Kenyan Government. They will give up the protection the UN has afforded them for the time they were in Kenya and once again become citizens of a Somalia that will, hopefully, not spit them out again.

Mr Ali Abdi Ali, a 47-year-old father of five, was among those who left Dadaab on June 16 as part of the voluntary repatriation programme. When the Nation caught up with him at the Dadaab airstrip, he was deep in thought, possibly contemplating what awaited him on the other side of the border.

When he left Somalia in 2011, he and his wife Khadija Mohammed had only two children. They got three more in Kenya, the youngest of whom is still suckling.

So why does he want to go home?

“I have lived in camps with my family for six years. The agencies provided us with enough food and water, but of late, it looks like there have been budget cuts and rations have become less and less, making it difficult to survive. I am going back because things might be better as it has rained and I will be able to farm,” he said.

Is he not worried about his family’s safety? “We are uncertain about the peace situation in Somalia but what option do we have? The Kenyan Government keeps asking us to leave and life is hard in the camps due to food and water shortages. Things might be better back home,” he said.

Mr Ali and his family will be escorted across the border by government repatriation officials as well as people from the UNHCR and other aid agencies. Mr Abdi Kulmiye has been a repatriation officer under the now defunct Department of Refugee Affairs for three years and he says he has seen thousands of refugees like Ali go back to Somalia through the voluntary repatriation programme.

“Once refugees register with UNHCR to go back to Somalia, they are given counselling, legal aid and information regarding the areas they are returning to by the Norwegian Refugee Council. The Islamic Relief and International Rescue Committee do a medical check to see whether the refugee is fit to travel. The Department of Refugee Affairs then issues them with a movement pass to get past roadblocks,” said Mr Kulmiye.

The government also gives them a police escort. For now, Mr Ali is hopeful the land he left is still available and that the rains pounding Mogadishu and other parts of Somalia will be sufficient to produce enough food for his family and for trade. “I hope my children will continue with their schooling once in Somalia. I am glad they will not grow up as refugees but as free citizens of a free country,” he said.

Share thisFacebookTwitterPinterestEmailWhatsAppUncertainty stalks returning Somalis Not too long ago, a convoy of five buses drove into Dadaab Airstrip, raising a great cloud of dust. They were ferrying 417 refugees who had volunteered to go back home to Somalia months before the May 2017 deadline given by the Kenyan Government. The refugees had woken up at