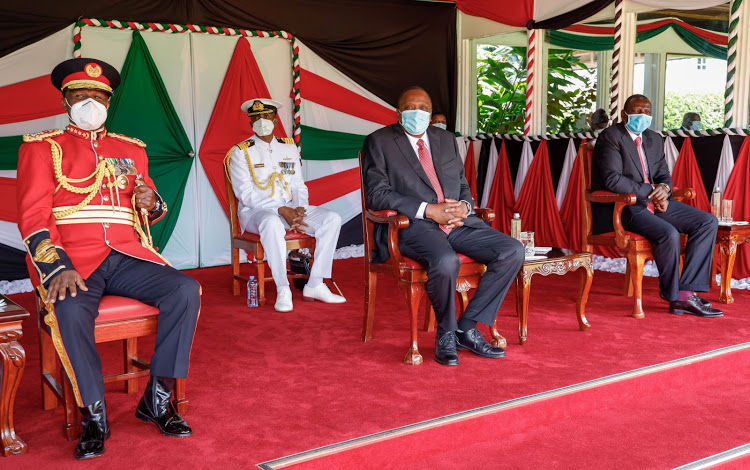 Uhuru set to address the country on Saturday.

• The President’s advisors said to have warned against lifting the curfew and cessation of movement.

President Uhuru Kenyatta is likely to retain the curfew and partial lockdown of Covid-19 hotspots owing to continued spread of infection in the past 21 days.

The Star has established that despite pressure to reopen the economy, Uhuru, who faces tough options, could have decided to be cautious in lifting the dusk-to-dawn curfew and the cessation of movement.

e President’s advisors are said to have urged him not to rush to reopen the economy at a time when the country’s incidence has spiked to 3.1 per cent from 2.1 per cent since the last extension.

Key people in the state are said to have insisted that lifting the curfew and cessation of movement imposed on some counties could trigger a virus explosion whose fallout would be disastrous.

With Kenyans’ insatiable appetite for travel, community transmission could increase to alarming levels, thus clawing back the gains made in the containment efforts.

“The President’s advisors are of the view that the protocols in place be retained although with some adjustment to the curfew hours,” said a source within the Office of the President.

“Kenyans are not serious with the issues of masks and social distance and are travelling all over, including going upcountry.”

According to the source, the curfew will be extended but with reduced hours to enable a gradual recovery of small businesses hit hard by the crisis. The start of curfew hours could be extended by about four hours so Kenyans can continue with their activities from 7pm to around 10pm.

The current curfew hours are between 7pm-5am. In addition, Nairobi metropolis, Mombasa, Kwale and Kilifi and Mandera are on partial lockdown.

President Kenyatta is expected to address the nation on Saturday to announce the measures after a National Security Council meeting. He has previously hinted at reopening the economy but the surge in cases posing an ultimate danger puts him in a conundrum.

Uhuru is set to emphasise home care for Covid-19 patients since isolation facilities have been overwhelmed.

On Thursday, Health Cabinet secretary Mutahi Kagwe revealed that isolation facilities are full, and with 80 per cent of the cases asymptomatic, Kenyans would be released to take care of themselves at home.

“It if is implemented, it will free our health facilities from congestion. We are looking at developing home-based and community care,” Kagwe said in his Covid-19 updates.

He said the new approach would ensure the care is within the World Heath Organisation protocols. Life among Kenyans has returned to normal, with traffic jams that had eased out after the lockdown in March back on major roads.