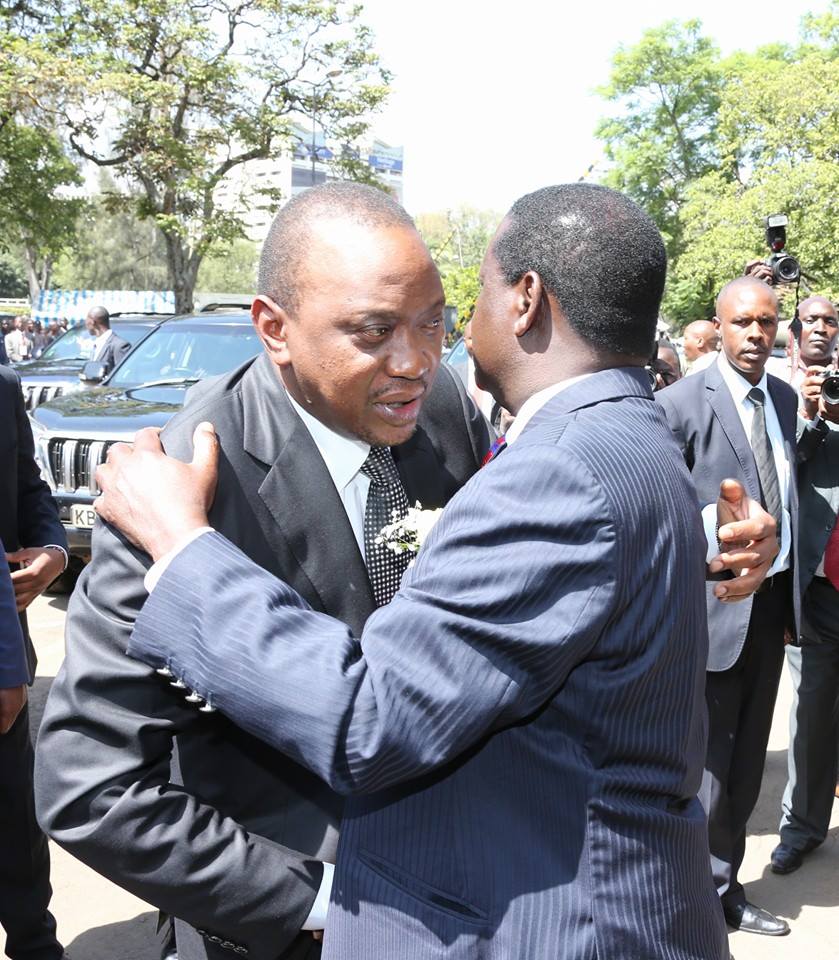 President Uhuru Kenyatta wants Cord leaders Raila Odinga and Kalonzo Musyoka to relinquish their party positions if they are to qualify for a pension.

He also wants them to quit elective politics before they can be considered to have retired and, therefore, qualify for their terminal benefits.

This move would lock Mr Odinga (above with Uhuru), President Kenyatta’s closest challenger in the last General Election, from future presidential races.

Mr Musyoka also has presidential ambitions and has announced that he will be seeking the Cord nomination for the race in the next elections.

It would require a two-thirds majority — or 232 MPs — to override a presidential veto.

Mr Kenyatta rejected the Retirement Benefits (Deputy President and Designated State Officers) Bill on May 15 but it was not until Tuesday that his memorandum was sent to the National Assembly.

At the same time, the President asked the National Assembly to reduce significantly the lump sum amount to be paid out to the beneficiaries of the law by calculating it based on one year’s salary instead of one year and a half.

MPs would have to mobilise more than two-thirds of the House if they are to reject the President’s recommendations. Mr Kenyatta’s action could also set the stage for a new round of political battles between the Opposition and ruling coalitions.

In his memorandum, he argued that the Bill appeared to have been based on the Act assented to by President Mwai Kibaki towards the end of his term conferring benefits on himself.

In that Act, active engagement in the activities of a political party was listed as one of the circumstances under which the benefits would be forfeited. That active engagement is defined as holding office in any party for more than six months after leaving the presidency.

“In contrast, this Bill contains no bar from such engagement,” said President Kenyatta, “which may have been an oversight since, as observed, the content of the Bill appears to be largely based on the Act.”

He recommended that the Bill be changed to include holding office or engaged in the activities of a political party as some of the circumstances under which a beneficiary would forfeit their dues.

The President also recommended that the beneficiaries, who would be the vice-presidents and former Speakers, be those who have served the country since January 1993. This means that Mr Awori, Mr Mudavadi and Prof Saitoti’s widow would be included on the list of beneficiaries.

Mr Kaparo would also be a beneficiary. He would, however, have to choose between leaving his job as the chairman of the National Cohesion and Integration Commission and getting the pension.

Mr Odinga and Mr Musyoka have in the past protested at the imposition of conditions before they can be paid their dues, with the former Prime Minister saying he cannot kneel to have his money.

All the beneficiaries that would fall under the Bill if passed in the form that the President wants will be paid the pension due as former MPs who have served two terms, which is $1,000 per month.

President Kenyatta argued that locking out those who served in the government from January 1993, the start of multiparty democracy, would be unfair.

“These persons were instrumental in holding the country together by offering dynamic and focused leadership that ensured meaningful and responsible democratisation and economic prosperity of this country,” he said.

While this also means Mr Mudavadi, who was President Daniel arap Moi’s last VP, would also benefit, he would also have to stop engagement in his new party, ANC.

If MPs are unable to raise the two-thirds of members needed to throw out the President’s memorandum, it means the clause would remain.

The adoption of his recommendations would mean that Mr Odinga’s lump sum payment would drop from the Sh21.6 million earlier proposed, to Sh14.4 million. Mr Musyoka would also be paid Sh13.2 million, down from Sh19.8 million.

Apart from the lump sum and the monthly pension, the retired leaders would get one saloon and one four-wheel-drive vehicle replaceable every four years; a fuel allowance and full medical cover providing for overseas treatment for each of them and their spouses.

They would also get armed bodyguards on request, diplomatic passports and access to VIP lounges at all airports within Kenya.

The beneficiaries would also be accorded a State funeral.

President Uhuru Kenyatta wants Cord leaders Raila Odinga and Kalonzo Musyoka to relinquish their party positions if they are to qualify for a pension. He also wants them to quit elective politics before they can be considered to have retired and, therefore, qualify for their terminal benefits. This move would lock Mr Odinga (above with