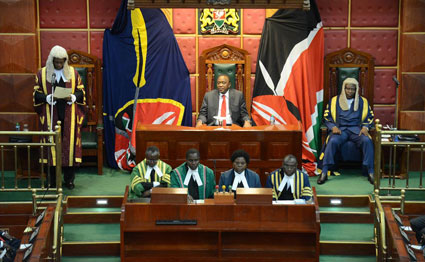 President Uhuru Kenyatta in the National Assembly on March 31, 2016 when he delivered the State of the Nation address. PHOTO | RAPHAEL NJOROGE | PSCU

President Uhuru Kenyatta will deliver his last State of the Nation address before the August General election on Wednesday afternoon.

In a Gazette notice dated March 10, National Assembly Speaker Justin Muturi and his Senate counterpart Ekwee Ethuro notified Members of Parliament (MPs) and senators that the special sitting will be held in the National Assembly.

“Honourable Members wishing to invite their spouses or friends to attend this event can register their names at Parliament’s main reception by March 9, 2017,” the letter from the clerks of both Houses reads. The State of the Nation event is an annual constitutional requirement where the President is accorded the opportunity to address the country on matters of national interest.

“The President shall, once every year, report, in an address to the nation, on all the measures taken and the progress achieved in the realisation of the national values,” the Constitutions reads.

“Publish in the Gazette the details of the measures and progress and submit a report for debate to the National Assembly on the progress made in fulfilling the international obligations.” The Constitution also gives the President the discretion to address Parliament at any other time that he deems appropriate.

This year’s event comes at a time when the country is barely five months to the General Election and political temperatures are on the rise as each of the political players endears themselves to the voters.

Given it is his last State of the Nation address before Kenya goes to the polls, it is expected that the President might use the opportunity to drum up support for his re-election by highlighting the Jubilee Government’s scorecard for the last four years.

“This annual address is turning out to be a public relations exercise instead of being a moment for the government to genuinely reflect on the state of this nation and boldly admit where it has failed,” Nyamira Senator Kennedy Mong’are said.

Makueni Senator Mutula Kilonzo Jnr called on the President to use the occasion to explain to Kenyans what happened to the corruption cases that he triggered after asking top public servants to step aside over the vice during a similar address two years ago.

So far, none of the public servants has been successfully prosecuted. And none has been cleared either.

Uhuru to deliver last State of the Nation address before election Reviewed by samrack on March 11, 2017 .