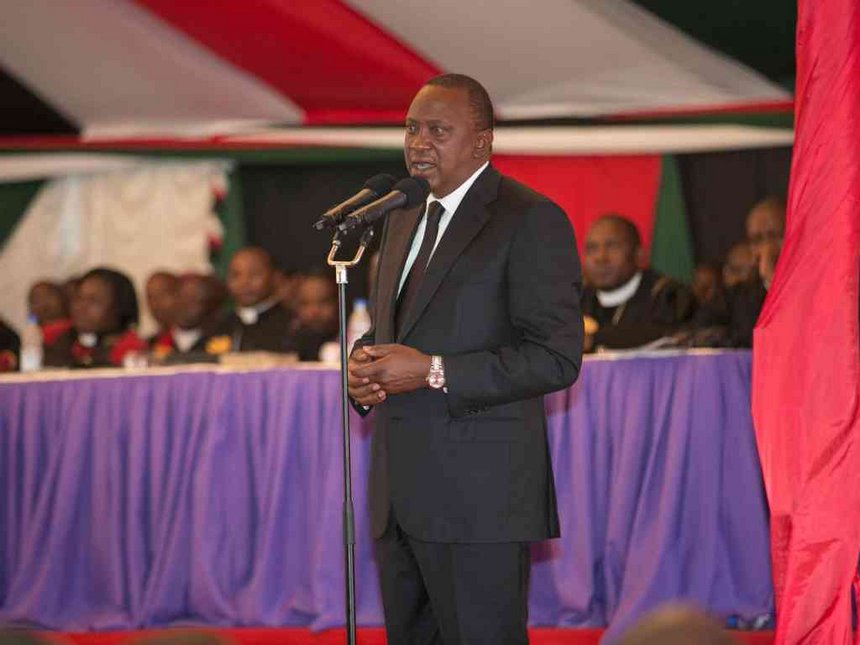 Uhuru, who spoke at the late Governor’s burial in Mathira West’s Hiriga area on Monday, said leaders should stop fighting counties as this makes it difficult for them to deliver.

“I did not know I could agree with Opposition leader Raila Odinga at a burial. This day is indeed historic as I agree that county governments need to be allowed to work,” he said. “Anyone opposed to them should wait for terms to end and seek election.”

Uhuru asked Nyeri MCAs to pass budgets to ensure services in the county are delivered.

“I call upon local leaders to help pass the budget because that is the only way we can actualise the dream that Gachagua had,” he said.

“We should not misuse leadership positions by making Kenyans suffer because of differences among arms of the county government. We should understand that oversight does not mean changing plans concerning Kenyans.”

The President eulogised Gachagua, whom he met in 2002, as a visionary and exemplary leader who guarded Nyeri’s resources against theft and misuse.

But Gachagua had been accused of misappropriation of public funds and abuse of office, following revelations by the controller of budget, that more than Sh800 million from the last financial year could not be accounted for.

Raila praised the Governor as a strong defender of devolution who did not entertain intimidation by ward representatives.

“I pay tribute to Gachagua and Makueni Governor Kivutha Kibwana for standing firm in support of devolution,” he said. “The two did not give in to blackmail and intimidation in the form of bench-marking trips.”

The Opposition chief said too much money was being wasted on unnecessary trips during bench-marking.

“Too much money has been used on trips that have not added value to our country,” he said, adding that people have misunderstood devolution and the principle of separation of power.

He told MCAs to stop blackmailing governors by refusing to pass budgets meant for counties as this is wrong.

Deputy President William Ruto said Gachagua was a committed and selfless leader who dedicated his life to serving his people.

Ruto noted that the late Governor was one of the leaders who championed the roll out of devolution in 2013.

“We were able to roll out devolution because of the commitment of governors led by Gachagua. His contribution in the Council of Governors showed how committed he was to his nation and Nyeri county,” he said.

“I was once told he called Nyeri leaders and asked them to converge in a hall so he could address them. That is a true show of love for the people.”

Regarding cancer, the DP said the government has set up hospitals across the country as the disease has become a menace.

“Cancer is now one of the leading causes of death. That’s why we have ensured hospitals at county level have radiography machines,” he said,

Gachagua died aged 64 from pancreatic cancer which he battled for almost two years. He was the first county chief to die in office.

He served as Mathira MP before being elected governor in 2013 under GNU party.