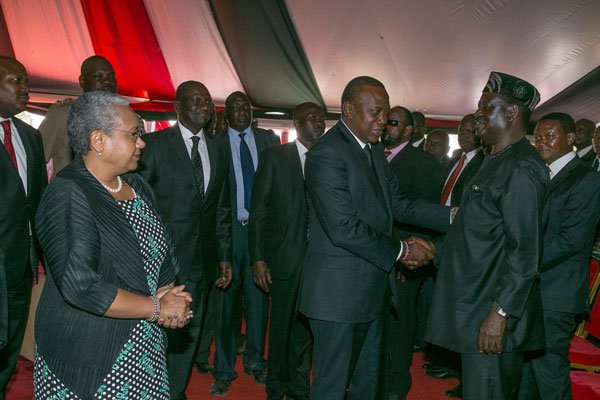 President Uhuru Kenyatta greets opposition leader Raila Odinga at Hiriga village in Nyeri during the burial of Governor Nderitu Gachagua on March 6, 2017. On the left is First Lady Margaret Kenyatta and Deputy President William Ruto. The leaders criticised Members of County Assemblies for fighting for their own selfish interests at the expense of development matters, during the ceremony. PHOTO | PSCU

President Uhuru Kenyatta and his political rival Raila Odinga on Monday came face to face at the burial of Nyeri Governor Nderitu Gachagua where they both sharply criticised members of county assemblies for being greedy and selfish.

The President and the opposition leader who appeared to be reading from the same script — a rare coincidence given their fierce political rivalry — warned MCAs against frustrating governors by refusing to approve county budgets before their own demands for allowances were met.

“If a governor is elected, support him and if you do not like him, wait for five years then kick him out. I want to particularly ask Nyeri MCAs to pass the budget and implement the governor’s promises,” said the President.

“We rarely agree on most political things with my friend Raila but on the issue of devolution, we share the same views,” added the President. Mr Odinga also tore into MCAs, saying they did not understand their roles in devolution and accused them of working to frustrate counties.

“Some MCAs are blackmailing governors into getting trips, allowances and tenders. That is unacceptable in counties that were supposed to be units of development,” added Mr Odinga. The leaders spoke at Hiriga village in Nyeri, where Governor Gachagua was buried the same way he lived — with pomp and surrounded by a galaxy of leaders from all shades of life and political friends and foes.

More than 10 choppers were used to ferry dignitaries to the ceremony where 300 cooks had been hired to feed thousands of mourners.

Other leaders who showed up at the funeral held on the grounds where the governor used to meet his supporters, were Deputy President William Ruto, First Lady Margaret Kenyatta, 35 governors and thousands of mourners.

The MCAs, some of whom had vowed to boycott the burial due to their differences with the governor, sat pensively at a corner, constantly nodding as the two leaders tore into them. An emotional Rigathi Gachagua, the governor’s brother, blamed MCAs for causing the county chief’s health to deteriorate when they decided to impeach him last year.

“He was to go for chemotherapy but he chose to clear his name with the Senate. He said he would rather die than have his name tainted,” he said.

The 64-year old Gachagua, who strode the county like a colossus, was buried at exactly 5.10pm. Mr Ruto said cancer was causing untold devastation among families, adding that the government would step up its efforts to equip hospitals to fight the disease. Gachagua died on February 24 at Marsden Hospital in London after a long battle with cancer.

“I lost a brother to cancer so I know how it feels. The government has installed 92 machines across the country to detect and treat cancer,” said the Deputy President.

Mr Gachagua’s children eulogised him as a strong leader who put up a strong fight even on his dying bed.

In his first public speech in months, an incoherent Mr Kibaki asked Kenyans to make the right choice in the next elections. “Kama hujui ukweli, usingonjee kuambiwa (If you don’t know the truth, don’t wait to be told),” said the former President.

Uhuru and Raila criticise ‘greedy’ MCAs at burial Reviewed by samrack on March 6, 2017 .

President Uhuru Kenyatta greets opposition leader Raila Odinga at Hiriga village in Nyeri during the burial of Governor Nderitu Gachagua on March 6, 2017. On the left is First Lady Margaret Kenyatta and Deputy President William Ruto. The leaders criticised Members of County Assemblies for fighting for their own selfish interests at the expense of