Uhuru said the CS has an indisputable track record of strategic leadership, management

by samrack
in Africa, Kenya, News, People
A A
0

The president said that the CS will be a strong consensus candidate, who will deliver an effective Secretariat driven by member state priorities.

• “She will help bolster unity amongst the Commonwealth family, and also enhance innovative partnership that optimises the impact of our organisation,” Uhuru said.

The president said that the CS will be a strong consensus candidate, who will deliver an effective Secretariat driven by member state priorities. 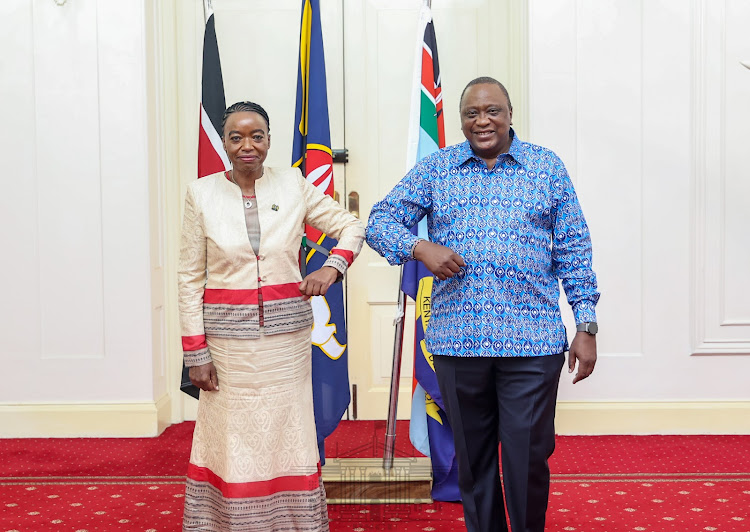 “She will help bolster unity amongst the Commonwealth family, and also enhance innovative partnership that optimises the impact of our organization.”

He has also lobbied for support from the Commonwealth fraternity.

The appointment of the 7th Secretary General will be made at the next Commonwealth Heads of Government Meeting (CHOGM) in Kigali Rwanda.

Commonwealth is an association bringing together 54 nations and states who share a common heritage and tradition.

The president said Kenya believes that the Commonwealth remains a primary actor for responding to the current challenges facing its member states and for building a common future.

“The success of our organisation lies in its ability to effectively address the needs of the member states, shape the collective agenda and implement its decisions for the realisation of our common aspirations,” he said.

“All these require steadfast leadership at the Secretariat to deliver a dynamic and influential Commonwealth.”

Commenting on her nomination at the same venue with the president, the CS said that she is willing, and ready to build connections, consensus, and commitment in the Commonwealth for shared prosperity.

“I am humbled and honored by the confidence of H.E. President Uhuru Kenyatta in nominating me for consideration as the next Secretary-General of the Commonwealth,” Juma said.

“I will work diligently towards securing an endorsement from the 54 Heads of Government that comprise the Commonwealth family.

The CS served as the Principal Secretary in the Ministry of Foreign Affairs (MFA) from January 2016 to February 2018.

She also served as the PS in the Ministry of Interior, where she led a team that drove reforms and transformation of the national security policy, the measures that reduced the country’s vulnerability to terrorist attacks, remarkably and restored security across the country.

Prior to her appointment to the Executive, Juma was Ambassador Extra-Ordinary and Plenipotentiary of Kenya to Ethiopia and Djibouti, and Permanent Representative of Kenya to the African Union, the Inter-Governmental Authority on Development (IGAD).

She also served under the same docket for the United Nations Commission for Africa (UNECA) between June 2010 and July 2013.

The CS was among the key efforts during this time was the negotiations for the re-hatting of the Kenya Defence Forces into the African Mission in Somalia (AMISOM).