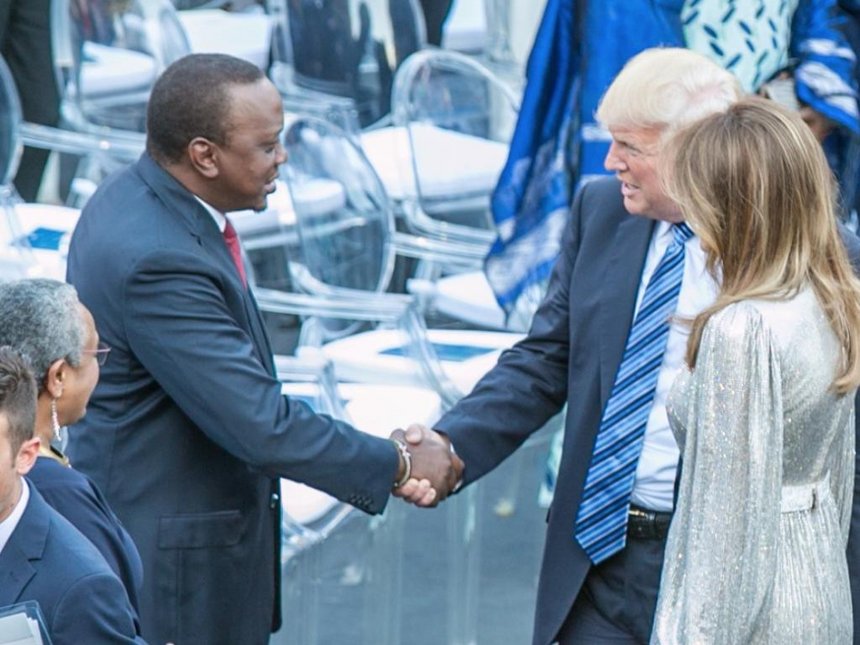 President Uhuru Kenyatta shakes hands with US President Donald Trump before a performance by the La Scala Philharmonic Orchestra in the ancient Greek theatre as part of the G7 Summit in Taormina, Sicily, Italy, May 26, 2017. /COURTESY

President Uhuru Kenyatta met with US President Donald Trump at the start of the G7 summit in Italy.

The two were photographed shaking hands before the a performance by the La Scala Philharmonic Orchestra in the ancient Greek theatre as part of the G7 Summit.

Uhuru arrived in Taormina on Friday where he will showcase Kenya’s achievements at the G7 Summit as well as meet leaders of the world’s most industrialised countries.

Uhuru flew to Sigonella Airbase in Sicily and then by helicopter to Taormina, a seaside resort heavily protected ahead of the summit.

Ahead of the visit to Italy, Uhuru said he saw Kenya as an ambassador for Africa at the G7, and a partner for the industrialised countries in key areas of concern – including security, the fight against terrorism, technology and innovation development, as well as deepening inclusive economic growth.

Foreign Affairs CS Amina Mohamed said the invitation to the G7 showed that Kenya had made immense progress in its relationships on the global stage, and the most important leaders wanted to hear Kenya’s views on matters affecting the globe.

The President is scheduled to hold bilateral talks with Italian Prime Minister Gentiloni this evening, attend a concert and dinner, ahead of a speech to the gathering tomorrow on “the timeliness and challenges brought about by innovation as a factor of economic growth and development in Africa.”

State House Spokesperson Manoah Esipisu says the G7 Summit offers the President an opportunity to project Kenya’s point of view on how to foster inclusive growth in the country, region and continent – especially on security matters.

“It is a suitable profile for us to engage directly with the world and the President will be taking that opportunity also to engage on Kenyan and African issues,” Esipisu says.

Esipisu says the Outreach Session – to which President Kenyatta will be making a presentation – will bring value and content to future decisions of the G7 Summit on how to partner for innovation-driven growth in Africa.

With the Italian Prime Minister, the President will discuss extending Kenyan exports, which currently include coffee, tea, hides and skins, fish, leather, fruits and vegetables, and cut flowers. Kenya is also looking at support for its projects in value-addition.

Italy is keen to keep its share of the Kenyan market in machinery, fertilizers, and accessories for medicines,

Besides Kenya, other African countries invited to represent the interests of the continent at the summit are Ethiopia, Tunisia and Nigeria.

The theme of this year’s summit is ‘Building the foundations of renewed trust’.