Uhuru Kenyatta supporters in US stage demos in New Jersey 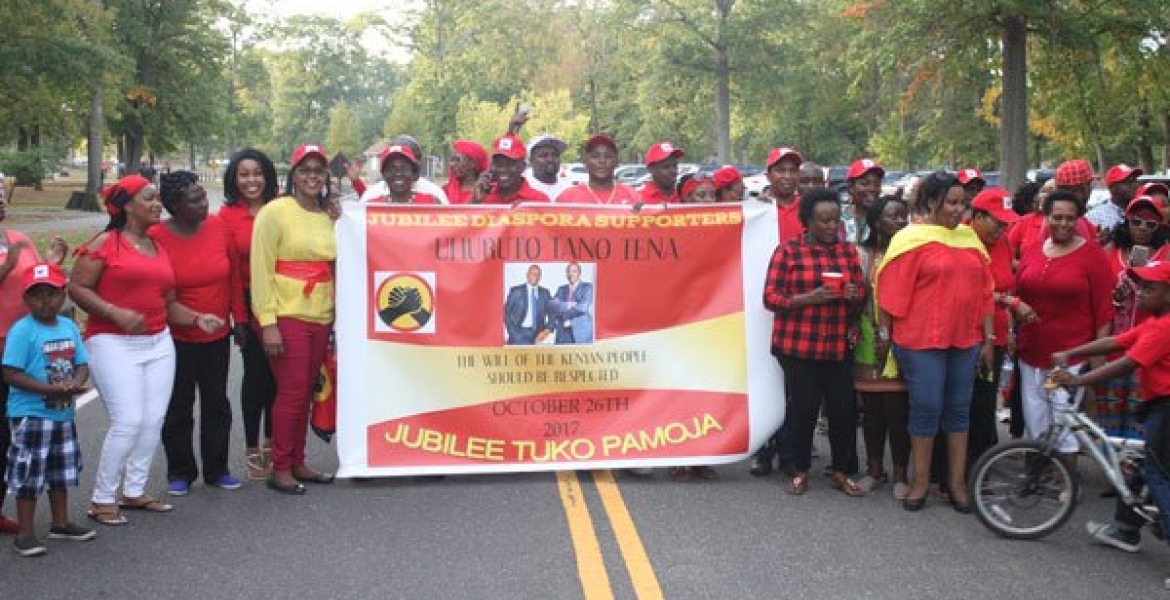 Uhuru Kenyatta supporters in US stage demos in New Jersey

In an apparent response to Nasa supporters’ demos in New York, New Jersey and Dallas, President Kenyatta’s supporters based in the US have staged a show-of-force in a New Jersey.

The Jubilee Party backers dismissed Nasa leaders’ and supporters’ call for changes within the electoral commission as hypocritical and selfish.

Speaking to the Nation during the relatively well attended rally at Johnson Park, New Brunswick, New Jersey, speaker after speaker took issue with the opposition’s demands for systems and personnel changes ahead of the repeat presidential election on October 26.

The only changes they support, they said, were those of electoral laws by Parliament.

This opposing positions taken by the two groups has become a flash-point among Kenyan Diaspora and is believed to be driving a big wedge between Luos and Kikuyus living abroad.

The discord has been openly playing out in the social media, especially Facebook and WhatsApp groups.

“We are holding this rally to show Kenyans and indeed the whole world that the Diaspora support the re-election of President Uhuru Kenyatta,” Ms Serah Munyiri, one of the organisers of the demo said on Saturday.

“These Kenyans are here to express their total confidence in the President and his deputy and also urge Kenyans at home who are eligible to vote to show up in large numbers to vote for President Kenyatta.”

While calling on Nasa to call off mass action to force IEBC to fire some staff accused of bungling August 8 General Election, the  Jubilee supporters urged Kenyans to maintain peace before and after the repeat election.

They lauded President Kenyatta for fostering unity  despite the heightened political temperatures through his many messages of peace and reconciliation.

Speaking at the venue, Mr John Rutere, a resident of Connecticut, urged Parliament to assert itself and amend the Elections Act to address ambiguity in election management.

He further criticised the judiciary for allegedly “overstepping its boundaries” and legislating from the bench by dictating how elections ought to be conducted, which is the responsibility of Parliament.

Ms Munyiri, a resident of NJ, urged the diaspora to mobilise and reach out to their families and communities back in Kenya to support the re-election of President Kenyatta.

She noted that several groups in the Diaspora had been mobilising resources from Jubilee supporters to help boost voter turnout at the grassroots and urged the gathering to support the initiatives.

Other Kenyans who addressed the gathering were Ms Mary Muturi and Mr David Asige, who heavily criticised the opposition for their empty rhetoric.

Nasa leaders, Mr Asige said, had been in government for many years yet their communities continue to wallow in deep poverty.

Kenyans at the gathering urged IEBC to ensure a credible election is held on October 26 to avoid a constitutional crisis.

Uhuru Kenyatta supporters in US stage demos in New Jersey Reviewed by samrack on October 9, 2017 .