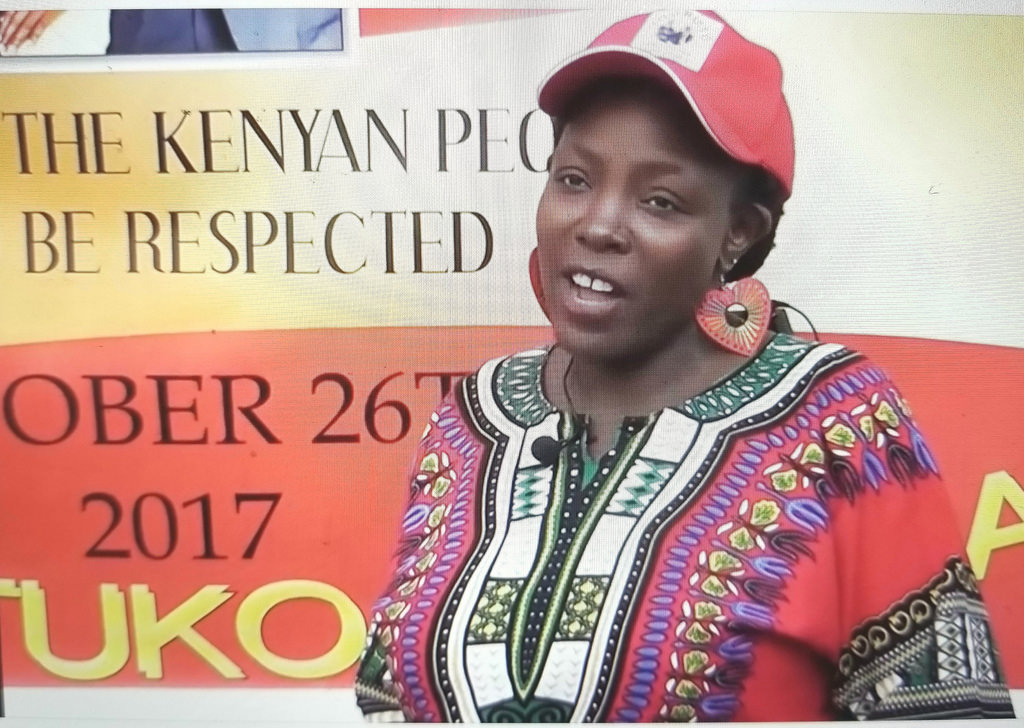 On Saturday October 7th, hundreds of Kenyans in the East Coast of the United States held a Jubilee demonstration at Johnson Park, New Brunswick, NJ in support of the re-election of President Uhuru Kenyatta and Vice President William Ruto.  The Kenyans expressed their total confidence with the President and urged all Kenyans to show up in large numbers to reaffirm the re-election of President Kenyatta on October 26.   They urged Jubilee and NASA supporters to maintain peace before and after the repeat elections.  Also, they applauded President Kenyatta for his continued message of peace and reconciliation, and urged fellow Kenyans to remain united despite the heightened political temperatures.

Addressing the gathering, Mrs Serah Mugambi, a long resident of New Jersey and a community organizer for Kenyans in the US, has urged the diaspora community to stay united and reach out to their fellow brothers and sisters to keep their families first and remember Kenya is for all Kenyans.  She wants to clarify the misconception that majority of Kenyan’s in the Diaspora are for NASA, which though she encourages and respects personal choices, she wants to reaffirm to the Jubilee leaders that the Kenyans in the Diaspora are 100% behind them.  Additionally, she has expressed that a majority of the Kenyans in the diaspora are very supportive of the President and Deputy for respecting the Supreme Court ruling and reaffirming to the nation the message of peace.

Mr. John Rutere, a resident of Connecticut, who was among the many who drove from different States to attend the occasion, has encouraged the instruments of Government to keep in communication and find a solution that will keep Kenya first in establishing a great democracy for the future.   He appraised IEBC for coming a long way in conducting fair elections and hopes that with a few more amendments, the issue of ambuigity in the manner elections are conducted shall be put behind us.   He passionately was in conformance with the Jubilee position that never again in the history of Kenya should the Supreme Court dictate the final judgment of the voters but rather the elections should be rightfully be left to the registered voters as defined in the constitution.

Many more Kenyans at large including David Asige, Teresa Njoroge, Triza Mbarire, Ephraim Kairu, and James Ndungu have criticized the opposition for their empty rhetoric and street demonstrations noting that some NASA leaders have been in government for many years but have made minimal changes to their communities.  They praised the Jubilee government for initiating infrastructure project which had made Kenya climb to a middle income economy.   Most notably, they expressed their strong desire for Kenyans in the Diaspora to keep investing in Kenya and encouraged others to do same, as Kenya is and will remain a vibrant economy in the coming years.   They reaffirmed that the Kenyans in the Diaspora are peaceful and open minded and will continue to support their families back home.

Other Kenyans at the gathering urged the IEBC to ensure a credible and fair election is held on October 26th to avoid a constitutional crisis.  They want Kenyans in the diaspora wherever they may be, to mobilize and reach out to their families and communities back in Kenya and  in support of the re-election of President Uhuru Kenyatta and deputy president William Ruto.   The community also wishes to remind all fellow Kenyans that our economy is the bed lock of our success,  and the government should take all measures to safeguard personal properties and look to prosper the economy to all corners of the country.

The Kenya Diaspora community wants to wish the best of luck to all the KCPE candidates and asked them to trust in God that their future for the country will be great and Kenya will always remain a law abiding country, which safe and peaceful.  Mr. John Rutere committed to award prize of Kshs 100,000 and Kshs 75,000 to the best KCPE female and male students respectively, in the County that will record the highest percentage vote for President Uhuru Kenyatta as a support of uhuruto education

Kenyans in East Coast US hold Massive Gathering in Support of President Kenyatta’s Re-Election Reviewed by samrack on October 9, 2017 .

Share thisFacebookTwitterPinterestEmailWhatsAppKenyans in East Coast US hold Massive Gathering in Support of President Kenyatta’s Re-Election On Saturday October 7th, hundreds of Kenyans in the East Coast of the United States held a Jubilee demonstration at Johnson Park, New Brunswick, NJ in support of the re-election of President Uhuru Kenyatta and Vice President William Ruto.  The