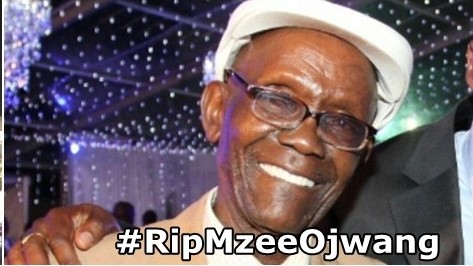 I have learnt with great sadness about the passing of Benson Wanjau, who was better known to all his fans in Kenya and beyond as Mzee Ojwang.

Mzee Ojwang lived a full life of great artistic accomplishment. His role as Mzee Ojwang is unforgettable and iconic. His devotion to that character and role was exemplary. Through it, Wanjau educated, informed and entertained Kenyans with unparalleled dexterity. He taught without sounding preachy, informed without boring anyone, and entertained without becoming trivial.

Wanjau devoted his life to the development of his legendary character and, whether with his troupe or alone, became a much-loved national figure. He also inspired a long line of comedians and actors who seek to replicate his feats.

Without a doubt, family television will not be the same without the promise of Mzee Ojwang regaling the nation with his antics.

National holidays will suffer the loss of a long-standing figure of unstinting reliability in delivery. The entertainment industry will grieve a man of simple but ferocious loyalty to his trade, an inspiration and role model to countless aspiring stars, and a pillar of the industry.

Mzee Wanjau, as Mzee Ojwang, was our Nation’s kind teacher and gentle critic. He taught us through his ever-green comedy, that we are never perfect, but that learning from our mistakes and waking up to our folly places us on the redeeming path to continuous improvement. I have been a fan of his since I was a youngster. He showed Kenya how to take itself more seriously by laughing at its own reflection in the mirror of drama which they hold before us.

He and his colleagues memorably demonstrated that the finest art and entertainment does not have to shed its social purpose. Rather, it is possible for artists to delve deeper into our condition and strive to help us seek the answers we all yearn after.

He charmed many generations of Kenyans from all walks of life by completely embracing a new ethnic identity and showing that our struggles are not unique, and that there’s much more that unite than divide us.

I looked forward to socialising with Mzee Ojwang and other artistes during the opening of the refurbished National Theatre. My sadness is greater for the knowledge that this will not happen. On behalf of my Government and the people of Kenya, I extend words of comfort, encouragement and condolence to the family, colleagues and friends of Mzee Wanjau.

A great artist has taken his final bow. We salute him. A legendary Kenyan has gone to rest. We wish him a fitting farewell. May God give you the strength to bear his passing, and may his soul find eternal rest in God’s kingdom.

Kenyan president Uhuru Kenyatta sends condolences to the Late  Benson Wanjau/Mzee Ojwang I have learnt with great sadness about the passing of Benson Wanjau, who was better known to all his fans in Kenya and beyond as Mzee Ojwang. Mzee Ojwang lived a full life of great artistic accomplishment. His role as Mzee Ojwang is