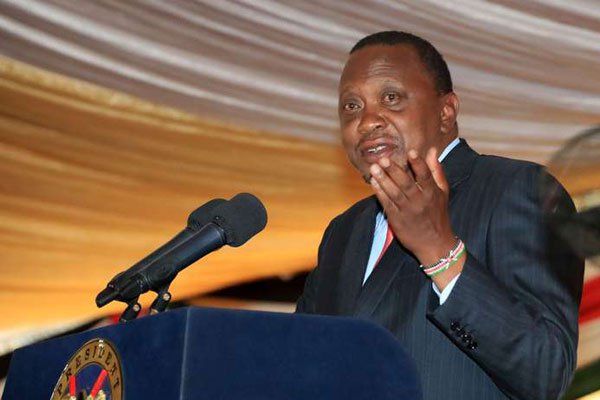 Other responses have been filed Attorney-General Githu Muigai and the Independent Electoral and Boundaries Commission (IEBC).

The three respondents argue that Supreme Court lacks jurisdiction on the petition and want it dismissed.

In his petition, the activist argues that the withdrawal of National Super Alliance (Nasa) candidate Raila Odinga and his running mate Kalonzo Musyoka from the October 26 repeat presidential election rendered the poll void.

He believes that the poll was invalid because no fresh nominations were conducted by IEBC and wants the apex court to order the commission to organise a fresh poll in 90 days.

But in papers filed on Wednesday, President Kenyatta says the case is an abuse of court process.

Mr Omtatah has failed to adduce evidence to support his claims, the Jubilee Party leader says.

President Kenyatta holds that the validity of his election cannot be questioned by Mr Omtatah because he moved to court even before it was held.

He further argues that the validity of an election can only be determined after the results have been declared by the IEBC.

Through his lawyer Fred Ngatia, President Kenyatta says Mr Omtatah has not provided proof of Mr Odinga’s withdrawal from the October 26 poll.

“It is common knowledge that the name of Raila Odinga was on the ballot as a candidate in the fresh election,” Jubilee Party Director of Legal Affairs Marykaren Kigen says in their affidavit.

“The only inference that can be drawn from this is that IEBC did not receive any valid notice of withdrawal from Nasa”.

It is her argument that Mr Odinga did not withdraw from the fresh election in the manner recognised by law, and that any alleged pullout was, therefore, of no legal effect.

“The proper interpretation of the Constitution is that elections are to be cancelled only where a candidate dies or no one has been nominated,” she says.

In its response, IEBC argues that the election was conducted in accordance with the Constitution and the applicable laws.

The commission says Article 140 (1) of the Constitution makes it clear when a petition challenging a presidential election may be filed within seven days after the date of the declaration of the results.

IEBC supports Mr Kenyatta argument that Mr Omtatah went to court before the election could be held, hence cannot challenged its outcome.

On Friday, the parties appeared before Deputy Registrar of the Supreme Court Daniel ole Keiwua, who said the file has been forwarded to Deputy Chief Justice Philomena Mwilu.

Mr Keiwua said Judge Mwilu would empanel a bench and inform the parties.