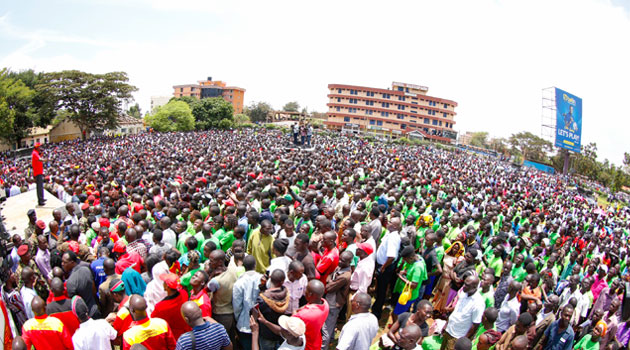 “There is no way that the government will allow any person to block any voter from exercising their right to choose the leader or leaders of their choice,” he said/PSCU

The President also said an election was about, and belonged to the Kenyan people and not the candidates.

“There is no way that the government will allow any person to block any voter from exercising their right to choose the leader or leaders of their choice,” he said.

President Kenyatta, accompanied by Deputy President William Ruto, spoke in Busia town on Friday where he formally received to Jubilee Paul Utuoma, the former MP who narrowly lost in the Busia gubernatorial elections and other Opposition leaders from the county.

The President thanked Busia residents for voting for him in the August 8 polls and urged them to turn out in large numbers to enable him win with a bigger margin in the October 26 fresh presidential election.

President Kenyatta assured the residents that voting for him will safeguard the development that he has initiated in the county in the last five years and open more projects.

Deputy President Ruto said the opposition was not ready for elections because it has already sensed defeat.

He said Raila Odinga was now thriving in chaotic situations to get into power through the backdoor, saying Kenyans will not allow that to happen.

“Our friends in the opposition are not interested in elections because they have no votes. They have already sensed defeat and that’s why they are looking for ways of getting to power through the backdoor,” said the DP.

“They have resorted to demonstrations with the aim of causing chaos and bloodshed with the hope of making the country ungovernable so that they can negotiate for a ‘nusu mkate’ government. But that will not happen,” the Deputy President added.

He told Odinga to stop misleading Kenyans that elections would not take place in October 26, the date set by IEBC, saying no one has powers to interfere with any election in the country.

“I want to tell Mr Odinga that if President Uhuru Kenyatta who is the Commander-in-Chief of the Defence Forces can’t stop elections in this country, who is he to tell us that he will stop the October 26 elections?” asked Ruto.

“Kenyans will go to polls in October 26 whether Mr Odinga participates or not. It is only Kenyans who can stop any election in this country,” added the DP.

He said Jubilee was ready for the fresh presidential elections as directed by the Supreme Court, urging voters in Busia County to turn out in large numbers and support the re-election of President Kenyatta.

The DP said the Government would continue to focus its energies on matters of development especially in the fields of energy, roads, health, education among other areas that have direct impact on the lives of Kenyans.

Otuoma said he has supported Odinga since 1992 but has nothing in terms of development to offer to the people of Western Kenya and the country at large.

“My brother William Ruto left us in ODM still singing about baba and now he is the Deputy President. We have said enough is enough and this is why we want to support Jubilee, the winning team,” said Otuoma.

“We want to form the next Government with the people of Busia being part of President Kenyatta’s transformative agenda,” added Otuoma.

Namwamba said they will do everything possible to increase the votes Jubilee got in August 8 from 35,000 to 100,000 in Busia County.

Wamalwa said the Luhya community has benefitted a great deal from the Jubilee Administration in terms of development and employment opportunities, urging voters to vote for President Kenyatta during the next election.

“There is no way that the government will allow any person to block any voter from exercising their right to choose the leader or leaders of their choice,” he said/PSCU Uhuru defends Jubilee changes to electoral laws The electoral law changes fronted by Jubilee directly remove the lacuna cited by Supreme Court in nullifying the