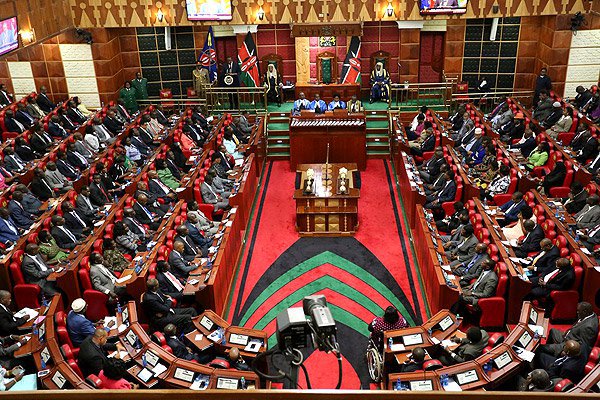 The first sitting of the 12th Parliament is set to be held on Thursday next week, according to the notice in the Kenya gazette by President Uhuru Kenyatta.

In their first sitting in the respective Houses, the lawmakers will be sworn in by the Clerks and then proceed to elect the Speaker and the Deputy Speaker then adjourn.

The legislators will then proceed for an induction where they will be taken through House standing orders among other House rules.

“Notice is given that pursuant to Article 126(2) of the constitution, I, Uhuru Kenyatta, President of the Republic of Kenya and Commander-in-Chief of Defence Forces, give notice that the first sitting of the twelfth Parliament— The National Assembly, shall be held at the main Parliament Buildings in the National Assembly chamber on Thursday, August, 31, at 2:30pm,” reads the gazette notice.

The Independent Electoral and Boundaries Commission (IEBC) on Tuesday published in the official KenyaGazette the names of 289 elected MPs and 1,449 Members of the County Assembly (MCAs).

Last week, the electoral commission gazetted the names of 47 woman representatives and the same number of elected senators.

Even as the MPs prepare to formally take oaths of office, they have already shown intention to reject the new salary structure that substantially reduces their salaries and allowances and want the status quo retained.

The lawmakers, through the Parliamentary Service Commission, on Wednesday accused the Salaries and Remuneration Commission (SRC) of unfairly targeting them in its efforts to slash the public wage bill.

The legislators in the 12th Parliament will also be confronted with a new set of regulations that were published last week.

The new rules are aimed at governing the conduct of MPs and ensure protection of the integrity of the institution.

All MPs upon being sworn in will be required to sign the new code of conduct that bars them from accepting any financial inducement as an incentive or reward while undertaking their parliamentary functions.

Jubilee Party, which won majority of the seats in both the National Assembly and the Senate in the August 8 polls, is once again comfortably set to control the 12th Parliament.

With a total of 164 MPs, Jubilee stands a better chance to go it alone in passing crucial legislation in the House

The Opposition is also expected to play its watchdog role despite its reduced numbers.

All the Opposition parties under National Super Alliance have 124 seats, including 16 for woman representatives.

Share thisFacebookTwitterPinterestEmailWhatsAppUhuru convenes first sitting of Senate, National Assembly The first sitting of the 12th Parliament is set to be held on Thursday next week, according to the notice in the Kenya gazette by President Uhuru Kenyatta. In their first sitting in the respective Houses, the lawmakers will be sworn in by the Clerks and