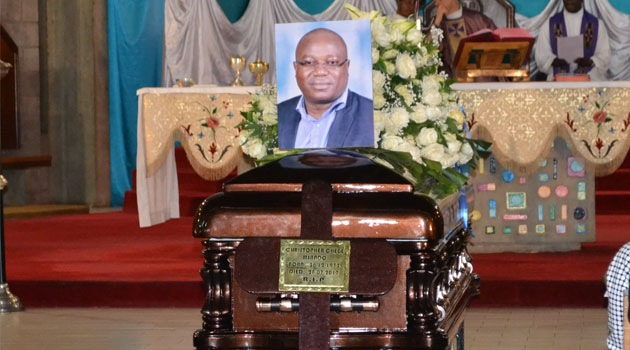 Two suspects have been arrested over the murder of Independent Electoral and Boundaries Commission ICT Manager Chris Msando.

The Director of Criminal Investigations Ndegwa Muhoro says the court has already granted investigators custodial orders to enable them complete the probe.

“We have two suspects in custody who are under investigation over the murder,” Muhoro told Capital FM Thursday.

“We applied and the court granted us custodial orders to enable us finalise the investigations.”

Msando was killed a week to the elections and his body was found dumped in a forest in Kikuyu alongside that of his female companion identified as Maryanne Ngumbu.

Msando’s requiem mass was held at the Consolata Shrine in Westlands attended by top IEBC officials—including Chairman Wafula Chebukati, CEO Ezra Chiloba among others who eulogised him as a dedicated man who played a key role in preparing last week’s elections.

His widow Eva said: “We shall meet with Chris on the beautiful show but I tell you again Kenyans. Vengeance is of the lord. The children ask why I don’t know what to answer. Let justice be our shield and defender. It is not going to go in vain. We have refused.”

His sister was categorical that the killing is linked to the work he did at the electoral commission.

The IEBC Chairman Chebukati said the commission is yet to come to terms with the ‘brutal murder.’

“The questions still linger on, who brutally murdered Chris Msando, why he had to face such a cruel death and senseless death. We pray that the police investigations conclude soon. And that we put a closure to this event that we all don’t understand what it is,” he said.

Msando went missing on a Friday, a week before the August 8 elections, after a TV interview in which he was highlighting the commission’s preparedness and his body was found the following day in a forest alongside a woman identified as Maryanne Ngumbu, with whom they had been having drinks with in town.

Muhoro said they have not established the motive of the killing but have interrogated several suspects.

Msando was killed a week to the elections and his body was found dumped in a forest in Kikuyu alongside that of his female companion identified as Maryanne Ngumbu/MOSES MUOKI Two suspects held in Msando’s murder probe Two suspects have been arrested over the murder of Independent Electoral and Boundaries Commission ICT Manager Chris Msando.