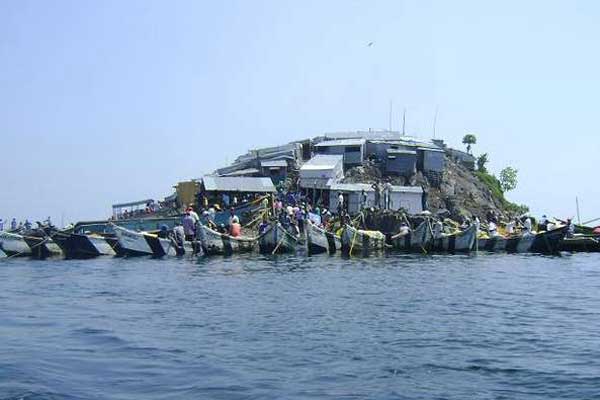 The clerks had gone to register Kenyan voters, mostly fishermen and traders who reside on the island.

The two clerks were quickly taken to the makeshift Uganda Police Station on the island for further interrogation.

The Ugandan police insisted that the “IEBC headquarters in Nairobi must write to them stating why the team was sent there without their knowledge yet they know that this Island is under dispute”.

“We will detain the BVR machine until we are convinced what their mission to the Island was…we cannot just be ambushed here by people carrying machines we know nothing about,” said a Ugandan officer, who requested anonymity.

Migori County police boss David Kirui said IEBC officials had received the report and were working with “other authorities” to get the officers released to continue with their work.

“We are trying to have them released immediately including the BVR machine,” stated Mr Kirui.

The incident sparked protests from Kenyans on the island, who insisted that they must be registered as voters.

“We had asked the IEBC to bring us their officials to enlist us before the expiry of the mass voter registration period but we are shocked that the neighbours are now interfering with the activities of the Kenyan government,” said Mr John Obunge, the chairman of the Migingo beach management unit.

Last month, the Nation highlighted the plight of Migingo’s Kenyan fishermen who were yearning to be enlisted as voters.

They said since they had an assistant chief, the island was recognized as being within the Kenyan boundary.

“Although the ownership row has not been conclusively addressed by the Kenya and Ugandan authorities, Kenyan fishermen and traders living on the island deserve to be registered as voters,” said Mr Obunge.

In the last general elections, the IEBC created a polling station on the island following pressure from the locals and the fishermen registered to vote.

According to Mr Obunge, the Island has about 500 fishermen and traders whose right to vote must be respected.

The fish-rich island is currently being co-managed by the Kenyan and Ugandan security officers.

The Ugandan security team is estimated to number over 20, including those in plain clothes, while there are only 12 Kenyan officers.

Both Kenya and Uganda have staked a claim to the island, a row that has lasted since 2002.

The two countries had set aside Sh140 million for surveyors to complete the work of determining the exact location of the densely populated island.

Though then President Mwai Kibaki and then Prime Minister Raila Odinga had been assuring Kenyans that the island was located within the Kenyan territorial waters, the two leaders seemed to have done little in pushing for the completion of the survey work during their tenure.

The joint survey work stalled after Ugandan surveyors pulled out of the team midway to consult their seniors in Kampala before the announcement of the final outcome.

But reliable sources indicated that the Ugandan officials were scared of being a party to an announcement that the island was in Kenya, for fear of reprisals from their government.