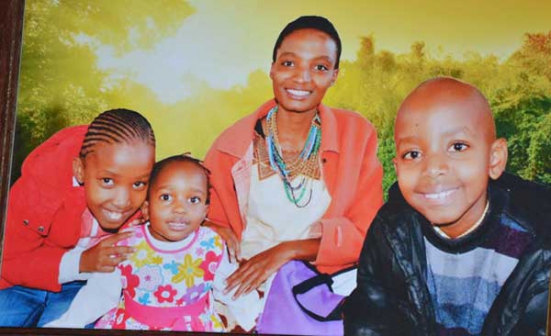 No words can capture the pain that was written on the faces of those who turned up at the church in Nairobi’s South C estate yesterday.

Friends and relatives mumbled words of encouragementto console the family of Peter Kibugi and his wife Hannah Wariara, who lost all their three children and a grand-daughter to a drunk and reckless driver on May 15 along the Eastern By-pass.

Josephine Njoki Kibugi, 25, Grace Njeri Kibugi, 10, Mike Mutua Kibugi, 8, and Angel Anne Wariara, 3, were crushed to death that Sunday evening by the recklessness of the truck driver, who in his inebriated state, had no regard for traffic laws.

The mother and children were headed home when the accident happened.

Wariara narrated amid sobs the incident that also almost claimed her life, nearly robbed her of her will to live and permanently scarred her life.

“We were coming from a church thanksgiving ceremony in Banana because my sister had just flown in from abroad. After the service, I was driving my children back home to Ruai when we met this crazy, drunk, reckless driver who was speeding and driving on the wrong lane,” she said.

“I tried to avoid him by escaping through some space between two parked cars on the side of the road to my right but that did not happen. I suddenly heard a loud bang from the left side of my car and I remember telling God not to take my life yet, because I was not done with his work on earth. I was hurled outside the vehicle through the door that was flung open,” she added.

Wariara hit the ground so hard that she suffered broken ribs and deep cuts to both her arms.

The truck driver tried to make a dash for his life but the crowd that immediately milled around the scene wouldn’t let him go. Police showed up just in time to save him from the wrath of the angry mob. He is still in police custody.

Wariara would later wake up in a hospital bed in excruciating pain and just when she thought that bad had come to worse, she received news that shook her to the very core of her existence.

“All of your children were crushed to death by the lorry that caused the accident,” said Pastor Waweru, who had been sent to break the bad news along with friends and family. After heaving a pro-longed sigh, Wariara said: “It was God’s will.”

Kibugi was abroad at the time of the accident and had to fly home after receiving the sad news.

During the requiem mass held yesterday at St Paul’s ACK Church in South C, two hearses carrying the bodies of the departed entered the compound only to be met by grieving faces that had come to pay their last respects.

As the four bodies were being ferried into the church, the church fell into pin-drop silence. Friends and family could not hold back their tears.

“It is time to say goodbye to my three children and one grandchild. My faith in God is so strong that I know their souls are in heaven and I will see them again. Rest in peace my dear children,” said Wariara.

Kibugi was too moved to utter a word as he stood beside his wife at the altar.

She gave a moving story of how her youngest son would always criticise her for eating without praying and now says she has put up posters in the house to remind her to pray before eating. Tributes, sermon and hymns over, the coffins were taken back to the hearses and transported to Langata cemetery.

Kibugi is now appealing to the Government to take stern action against drunk drivers. “If that lorry driver was not drunk, my children would still be alive. I would like to appeal to all drivers to avoid drinking and driving because it has cost us so much. Parking on the roadside should also be outlawed because if those vehicles were not parked there, my wife would have had a better chance of escaping the ordeal,” he said.

Despite the loss of an entire generation, the parents still hold the belief that it was God’s will and say they will always be faithful to His will.

Their children were buried in separate graves, lined up from the oldest to the youngest.

Tragedy As Kenyan Family Mourns, Bids all their Children Final Goodbye Reviewed by samrack on May 27, 2016 .

Tragedy As Kenyan Family Mourns, Bids all their Children Final Goodbye No words can capture the pain that was written on the faces of those who turned up at the church in Nairobi’s South C estate yesterday. Friends and relatives mumbled words of encouragementto console the family of Peter Kibugi and his wife Hannah Wariara, who