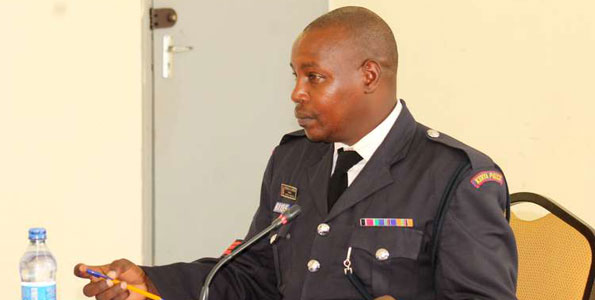 “That is a lot of money to be handled by yourself alone. You could be having 10 personal assistants for this kind of work. Am afraid that is what we observed,” the chairman of the National Police Service Commission Johnstone Kavuludi told the officer.

Mr Muthini’s transactions on his M-Pesa accountlast year are equivalent to what he would earn working in his current position for 58 years.

The commission is on its third day of vetting traffic police officers in Mombasa where most have been found with huge M-Pesa transactions.

The vetting has laid bare an elaborate network through which senior traffic police officers demand huge amounts of money from their juniors in the course of their duties.

Most of those found with hefty M-Pesa transactions explained that they were members of merry-go-rounds with their senior counterparts to whom they were sending money.

The findings are in line with the persistent ranking of the traffic police as most corrupt institutions whose members regularly use dirty tactics such as extorting money from motorists, especially matatus to enrich themselves.

Chief Inspector Safari Katana was on Monday put to task over his acquisition of assets worth more than Sh64 million. Chief Inspector Abubakar Bakari was also put on his defence over his Sh50 million wealth, highlighting the millionaire status of officers serving in the traffic department.

The Sh35 million that Mr Muthini transacted on his mobile phone translates to Sh3 million a month — or equivalent to what CEOs of blue-chip companies listed on the Nairobi Securities Exchange are paid.

Mr Muthini told the panel that much of his financial dealings are done via M-Pesa and that the millions of shillings he has transacted is spread over many years.

“You may have seen some bigger amounts but it is from a longer period. My M-Pesa statement is from 2012 up to date,” he said, adding that proceeds of a loan borrowed from the police Sacco in 2013 were also transacted through M-Pesa.

“I have used M-Pesa to transact most of my work since I work far from home and wouldn’t make it there every now and then,” Mr Muthini added.

A number of police officers were caught trying to alter M-Pesa statements, which the Kenya Revenue Authority wants to use to nab tax cheats.

More than 42 out of 238 traffic officers from the Coast region have been interviewed by the vetting panel.

The National Police Service Commission (NPSC) is targeting 598 officers from Coast, Nyanza and Western by the end of the vetting exercise expected across the country.

On Monday NPSC chairman said those to be vetted are constables and inspectors who have been in the department since 2012. The exercise is focusing on the officers’ profession, entry qualifications, human rights, disciplinary and financial aspects.