Patricia Mataga is an Anti-Racism and Bullying Campaigner at Boston University in South Africa, something she is so passionate about that the whole campus knows her. 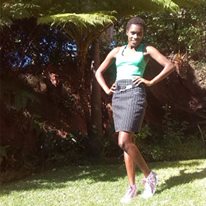 In many South African universities, racism, xenophobia and bullying is so rampant and widespread.

Various regulations to curb it have yielded little fruit. But campaigning against these excesses is what a pint sized third year Marketing student, Patricia Mataga, is revered for, especially among black and foreign students in the university.

She has been vocal in the establishment of laws that require racist and bullying acts be prosecuted or fined. Through her “nobody can sit on your back unless you bend” slogan, she is perhaps one of the most popular students in the university.

Weighing only 49 kg, the 21-year-old girl sends shivers to white students who harass and intimidate black South African students, and Africans from other countries.

Her efforts have seen dropout rates among black students decrease by 18 percent in the 2014/2015 academic year according to Joram Hinds, an admissions officer at Boston.

As of today, through her efforts, students who get bullied can be allowed to have guns for self-defense in case things get worse for them.

Hailing from Kapsabet’s Siksiket village, Patricia, or Tricia, as she is popularly known, little did it ever cross her mind that at one point in time, she would face brutality at the hands of fellow Africans.

So traumatised she was in her first year that she swore to make ketchup out of any senseless being who could joke with her.

But being who she is, she decided to do what could save many other students from this plight. Three years later, Tricia is an accomplished college girl with enviable influence who is ready to defend her course come what may.

Over the past few months, Patricia has been invited to speak at various events in efforts to curb the cruelty of racist students and bullies as well.