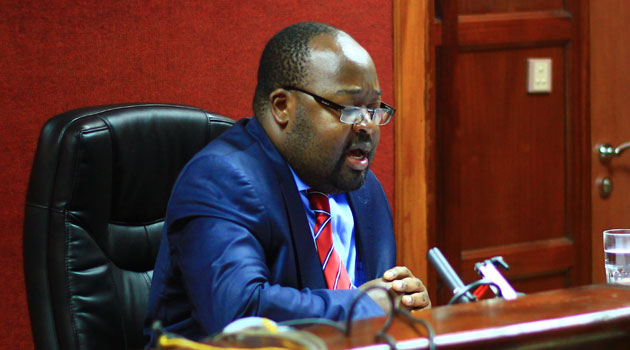 The High Court has declared the Constituencies Development Fund Act 2013 as defective and therefore unconstitutional.

However, the order declaring it invalid has been suspended for 12 months, to give the National Government time to remedy defects in the law.

“The court considered that the CDF had been running for a decade and that the funds for the financial year 2014/2015 have been disbursed and the budgetary process for the next year was in progress. As the fund had entered in top legal obligations that needed to be dealt with, it was in public interest to suspend the period of invalidity of the impugned Act for a year to give room for corrective and transitional measures,” read the judgement on Friday.

The ruling was issued by a three-judge bench comprising Justices David Majanja (pictured above), Isaac Lenaola and Mumbi Ngugi.

The case was filed by The Institute for Social Accountability (TISA) and sought to address four main issues; whether process of the enactment of the CDF was constitutional, whether it violated the principles of finance and division of revenue, whether it violated the division of powers and functions and whether the CDF Act 2003 offends the principle of separation of powers.

The ruling read out by Justice Majanja said the law was unconstitutional as the Senate was not involved in its enactment, that it interfered with the functioning of the county government and that it undermined the devolution of power, accountability and good governance.

It is due to this and the fact that disbursement was already on course that the national government was given time to ensure the law which has greatly impacted underdeveloped regions in parts of the country was constitutional.

“The national government may remedy the defect within that period (12 months) and the Constituencies Development Fund Act shall stand invalidated at the expiry of the 12 months or may be earlier repealed whichever comes first,” read the judgement.

Speaking soon after the verdict, Wanjiru Gikonyo of The Institute for Social Accountability, the petitioner in the case, hailed the ruling saying this was the beginning of the protection of devolution.

“We have a problem with impunity in this country, we are seeing a replication of the CDFs through the Ward Development Funds because legislators want to sit in Parliament and implement projects. We are so happy that the Court has declared very clearly on those factors that we must protect devolution and that all funds from the National Government must be channelled through the structures of the county governments so this will impact other funds,” said Gikonyo.

On August 8, 2013, Parliament passed the Constituencies Development (Amendment) Bill, 2013 which gave them full control over the funds.

The amendment bill also ensured that the money was not allocated as additional revenue to the counties and thus the Members of the National Assembly were in charge of it.

This was against the demands by Governors and Senators who wanted the money to be administered through counties and as part of addition funding for development.

The High Court has declared the Constituencies Development Fund Act 2013 as defective and therefore unconstitutional. However, the order declaring it invalid has been suspended for 12 months, to give the National Government time to remedy defects in the law. “The court considered that the CDF had been running for a decade and that the