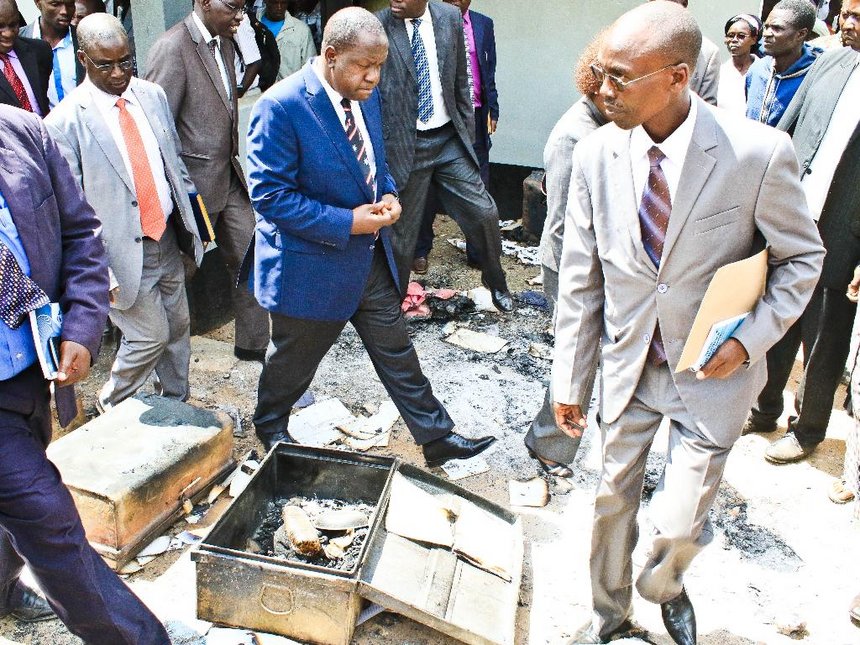 From fighting the media, to causing chaos at the Lands Ministry (as acting CS) and now fighting Education officials and unions, the man from Borabu, Nyamira county, has also earned the sobriquet “the Magufuli of Kenya” because of his impromptu visits to public schools.

Some see him as unnecessarily combative and not straightforward, even in simple matters that can be resolved without face-offs.

When the Star conducted an opinion poll this past weekend, 57 per cent of respondents said they were satisfied with Matiang’i’s performance, despite the current crisis in the education sector.

Some 30 per cent of respondents said they were either very dissatisfied or somewhat dissatisfied with the CS’s performance.

On the ongoing crisis that has seen over 100 schools suffer arson incidents, 50 per cent of respondents said Matiang’i has not handled the situation well.

Another 47 per cent said the CS had handled the crisis well, while three per cent gave no answer.

But even with this divided opinion, an overwhelming majority said that President Uhuru Kenyatta should not sack him as has been demanded by some opposition leaders.

According to the poll, 69 per cent of respondents said he should not be sacked, while 28 per cent expressed their desire to see him leave office.

The poll was conducted on Saturday in Nairobi and covered 500 respondents aged between 18 and 50 years.

Last week, opposition leaders led by Cord co-principal Moses Wetang’ula called on the CS to resign over the ongoing fires that have hit schools countrywide.

The CS has blamed the unrest on exam cheating cartels that he says are unhappy with the reforms he is implementing in the education sector.

Matiang’i seems to be a man who is always followed by trouble over his policy decisions.

The CS has handled three ministries since 2013, when he was first appointed to head the Information, Communication and Technology docket.

He was also at the Ministry of Lands and Housing as acting CS when Charity Ngilu was suspended, following allegations of graft.

The CS has during his tenure at the three ministries made proposals that have attracted unending criticism from industry players.

Upon assuming office at the ICT ministry, he immediately got into trouble with the media fraternity over the Media Act 2013 and the Kenya Information and Communications (Amendment) Act 2013.

The media argued that these laws were unconstitutional and aimed at stifling the industry and journalists’ operations generally.

Some of the sections of the two laws have been ruled as being unconstitutional by the courts, after the

Matiang’i’s run-ins with the media did not end here, with controversy hitting him again during the digital migration period.

Royal Media Services, the Nation Media Group and the Standard Media Group were opposed to the switch from analogue to digital.

They moved to court to challenge the switch-off date and the Communication Authority of Kenya was directed to open dialogue with the media houses.

When he was at the ministry of Lands, the CS was engaged in an unending war of words with National Land Commission chairman Mohammed Swazuri.

However, the NLC and the ministry of Lands had been fighting even during Ngilu’s tenure.

At one point, President Uhuru Kenyatta was forced to intervene and call a ceasefire between Ngilu and Swazuri, but it never lasted.

The major controversy between Matiang’i and Swazuri arose from the proposed Bills seeking to amend the land laws and trim the NLC’s powers.

Proposed amendments to the Land Registration Act also create a powerful Land Registrar with the powers to alter land records.

The changes also seek to eliminate the role of the NLC in the setting up of land registries, and instead give the powers to the Cabinet Secretary for Land.

The changes propose the NLC bosses be appointed directly by the Public Service Commission, a move that would technically make them subservient to the Executive arm of government.

Throughout, Matiang’i maintained that the proposed laws were necessary and those opposed to them had been insincere.

He was however moved to the ministry of Education as Parliament embarked on debate on the three Bills.

As was the case in his previous ministries, Matiang’i has been at loggerheads with stakeholders in the Education sector over his proposals.

His proposals have put him in the crosshairs of teachers’ unions, who have opposed them and even called for his resignation.

While the move was lauded by the public, some teachers were unable to provide answers to questions concerning finances.

The visits are cited as one reason for the teachers’ strikes as they were undertaken in the full glare of media cameras, something that angered teachers everywhere.

Matiang’i’s visits revealed a problem in the pupil-to-book ratio, which in some schools stood at 12:1.

This did not make Matiang’i happy at all, given the fact that the government pumps a substantial amount of money into FPE and Free Day Secondary as learners’ cash.

government to buy the books and distribute them to schools rather having head teachers buy the books using cash advanced to them under the free learning cash capitation.

The booksellers were unhappy.

In 2013, MPs were furious with Matiang’i for portraying them in a bad light. The MPs said Matiang’i had disrespected them.

He had been summoned to appear before the Public Investments Committee after failing to honour invitations to appear four times.

Matiang’i was due to appear before the committee over the transfer of government shares in Telkom Orange from 49 per cent to 30.

Matiang’i complained of interference by MPs in his ministerial duties.