There is panic among Murang’a politicians, with reports that Raymond Matiba, could run for governor 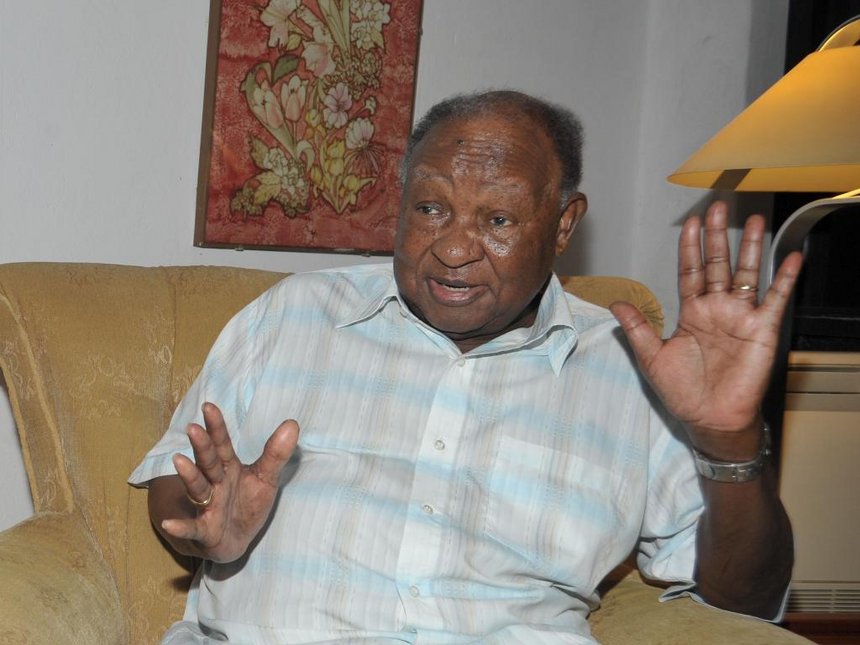 There is panic among Murang’a politicians, with reports that Raymond Matiba, the eldest son of veteran politician Kenneth Matiba (pictured), could run for governor at next year’s election. The former chairman of the Kenya Tourism Board is said to be keen on facing off with Kigumo MP Jamleck Kamau and incumbent Mwangi Wairia for the JP ticket. He has given the other aspirants sleepless nights, as he has an easy name to sell, due to his father’s towering past political activities. Some Murang’a political pundits even think Raymond may be joining the long list of President Uhuru Kenyatta’s possible successors as Central Kenya kingpin. Uhuru and Raymond are fast friends, attended St Mary’s School at the same time, were circumcised together and Uhuru recuperated in the Matiba residence. Retired President Daniel Moi replaced Uhuru with Raymond at KTB, when the former joined Parliament in 2001.

As the government chases mega corruption across ministries, a league of operatives, who man pay-points in some ministries, have become real tyrants. They brazenly demand kickbacks to process payments, even from their seniors. Some sit on vouchers for months on end. Others won’t release per diem to those due for payment for as many as three months, waiting for kickbacks. Among the most notorious is a man now code-named “Vulture” at Maji House, who could be siphoning out as much cash in corrupt deals as those named in mega sleaze deals.

A Nyanza senator, who had been relishing the release of millions of shillings for senators to monitor how governors spend public funds, is in trouble. The lawmaker, upon hearing the National Assembly had trashed the regulations meant to unlock the fund, almost broke down in the corridors of Parliament. He was overhead saying, “We have been [unprintable] again big time. So, where do we run to?” As he engaged himself in rhetorical questions, an MP from a his county placed a hot nail on a healing wound, telling him senators have nothing to spend money on and are merely looking for campaign resources. The gutted senator walked out in a hurry and drove away only to realise he had left his bodyguard and driver behind – a couple of hundred metres.

A Jubilee aspirant in Kigumo is the laughing stock of the town. A mole tells Corridors he has been trying to raise funds from the rich businesspeople from Murang’a to facilitate his campaign, but is yet to receive help. Residents question why the retired teacher decided to run for MP when there are younger hopefuls ready to give him a run for his shallow pockets. They have nicknamed his campaign “Team NSSF”!

There is panic among Murang’a politicians, with reports that Raymond Matiba, could run for governor Reviewed by samrack on November 18, 2016 .

Deputy president William Ruto when he visited Kenneth Matiba Corridors of Power There is panic among Murang’a politicians, with reports that Raymond Matiba, the eldest son of veteran politician Kenneth Matiba (pictured), could run for governor at next year’s election. The former chairman of the Kenya Tourism Board is said to be keen on facing