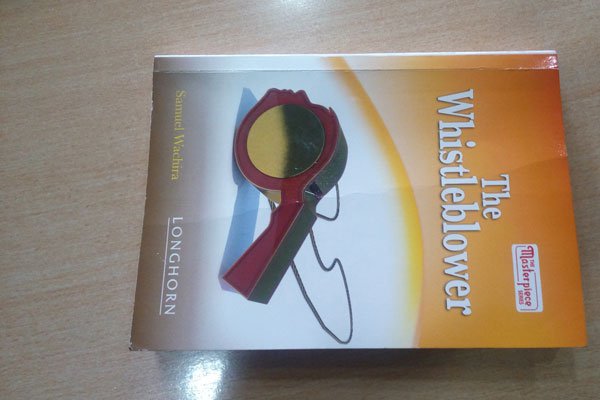 The Whistleblower by Samuel Wachira is a book set in the fictional Ndiambo Land. The book starts just before the post-election violence. PHOTO | NATION

The memories of the 2007/2008 post-election violence are still fresh in the minds of many Kenyans who were affected. Even as many have tried to get answers, or at least closure, this has not been forthcoming. A new novel by a catholic priest fictitiously addresses this and tries to give us the answers.

The Whistleblower by Samuel Wachira is a book set in the fictional Ndiambo Land. The book starts just before the post-election violence, where the main character, Sheriff, is introduced as a promising policeman in his career with a clean record whose guilt is eating him up about lapses in the system.

The death of his wife and children during the violence almost drives him off the edge in despair. But his life is saved from going down the drain by the death of his friend, Larry, a journalist who was in school with him. The death of the journalist creates a domino effect in the deaths that follow.

In the post-election angle, the author places the antagonists General as the head of police, a man of immense power resources and connections who has no empathy for his country or even his fellow human beings.

What follows is a Robert Ludlum-like case, which involves the antagonist playing the protagonist to his whims. General is attempting to recover documents which implicate his involvement in the violence while using Sheriff. They landed into his wife’s hands due to his carelessness when he came home drunk. She attempted to blackmail him with them to get a divorce. She was killed.

This is where Sheriff gets into the thick of it. Realisation dawns on him that the kidnap and murder of General’s wife was stage managed, that she attempted to use the journalist to leak out information. Later, he discovers that her chauffer and her maid died as a result and her lover was thrown into police cells while his murder was faked.

As the novel comes to an end, a character is introduced, Bob Smart, a cop who did investigations and uncovered what had transpired during the violence. He is the first victim to die of that information after he had turned it over to the General.

Mr Wachira paints a picture of a society where the rich wine and dine in the backdrop of murders. The General throws a funeral wake that is almost a party. Of leaders, his friends who are connected by a web of deceit. Of a public that suffers clueless of what is going on.

The events in the novel, starting before and after the violence, albeit fictional, leaves one wondering if the same did not transpire in Kenya. That the echelons of power then were involved and watched the country burn, yet later the government did nothing about it even in the face of glaring evidence.

Apart from the violence, the book also paints the dangerous lives journalists go through. It is no secret that those in power will go to any lengths to hide certain information from public eyes. In the backdrop of reality, journalists get threatened, lied to, sabotaged and sometimes killed in their line of work.

He also addresses the rot in the police force, where they take bribes openly and are used to carry out executions or other commands from their bosses.

In as much as the book attempts to answer this and portray society as such, it has its shortfall in that the larger conflict, which is that of the post-election violence, is not resolved. After Sheriff exposes the General and his cronies, they only go to jail or resign from office. He does not give us a resolution for the public.

The book is well written, action packed with simple language and a few tricky wordplay phrases. However, one can’t help but feel that the author concentrated too much on the plot and failed to give it depth. Further, it is too much of a simple read, it does not offer enough plot twists or delve into a full character development and psychology of the players.

The story is not new, the characters are not new, but it’s a very captivating thriller that will keep you thumbing through to expect action packed chases, fistfights, and witty escapades.

Greatest of all, the priest has tried to give answers, although speculative, as to what really transpired.

riest takes a deep look at dark side of 2007 violence

Share thisFacebookTwitterPinterestEmailWhatsAppThe Whistleblower by Samuel Wachira is a book set in the fictional Ndiambo Land. The book starts just before the post-election violence. PHOTO | NATION Book by priest takes a deep look at dark side of 2007 violence The memories of the 2007/2008 post-election violence are still fresh in the minds of many Kenyans