There is a new market -on WhatsApp 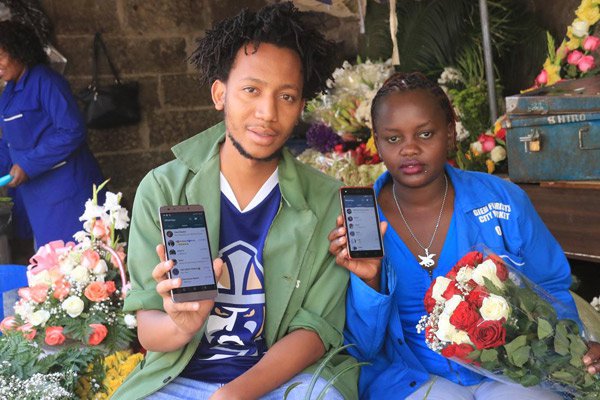 Evans Mwangi and Ann Lepishoi sell flowers at the City Market in Nairobi. They heavily rely on the WhatsApp platform, which is revolutionising online marketing, to market their flowers. PHOTO | JEFF ANGOTE | NATION MEDIA GROUP

There is a new market -on WhatsApp

Rosemary Mukhangabwe had a novel idea of selling fish in Embakasi, Nairobi, sometime in 2015, but she lacked the means of publicising her business.

Besides, she had no cash to rent a stall at the shopping centre, buy cold storage or even pay county government licences.

But she soon realised that she could use her smartphone to run her agribusiness.

Rosemary joined a WhatsApp group in her neighbourhood in 2015 and soon started selling fish using the app.

“Advertising has never been easier for me since then. All I do is post the stock I have, which I store in my fridge in my house. Members and buyers come for them or I deliver,” says Rosemary.

She also sells fruits through the several WhatsApp groups she belongs to.

The trader started by buying fish from the City Market in small quantities and selling to her customers. Now she brings in fish herself from her rural home in Budalang’i, Busia County.

“I purchased fishing gear for some youth there and we got into an agreement that I be fetching fish from them at subsidised rates once or twice every week, while they are free to sell to anyone else the rest of the days,” she says.

She travels to Busia every Sunday and buys the fish directly at the lakeshore, stores in ice boxes and travels back to Nairobi where she prepares the stock and then posts pictures on the three WhatsApp groups she belongs.

“I sell the fish from my house at between Sh250 and Sh650. If I were to do business the conventional way, I would have had to rent a stall, pay licensing fees and market levies, which are huge business costs.”

She uses power in her house to run her freezing equipment.

“Orders begin trickling in almost immediately I post the pictures,” she says, concurring that the platform’s prompt response from customers is a huge plus.

Evans Mwangi and Ann Lepishoi sell flowers at City Market in Nairobi and heavily use WhatsApp to do so.

“One of our group is called Flower Baskets. We post photos of our products to members and those who like them make orders. Others send their requests and we exchange photos of the stock we have. If they like them, we deliver,” they say.

Their customers come from Nairobi and its environs. They sell a basket of flowers at Sh2,000, while a rose goes for Sh50 and a bunch of 12 flowers at Sh400.

Mildred Atieno in her kitchen in Embakasi, where she also uses WhatsApp to market fish which she sells. It all begins with uploading photos of the fish in the group, then members put in their orders or share them with other groups. PHOTO | BRIAN OKINDA | NATION MEDIA GROUP

WhatsApp’s convenience, the ability to reach a huge number of potential customers at once, quick response from the clientele and the freedom from other business running costs are what are attracting farm produce traders and farmers to the app.

It all begins with uploading photos of their produce in the group, then members put in their orders or share them with other groups.

But the success of WhatsApp group messaging depends on the discipline of members.

Antonio Mudongi, a poultry farmer in Kitengela, who uses the app besides marketing directly to shopkeepers, recounts that he was in one WhatsApp group and hoped to reach tens of potential customers but to his dismay, he could not.

“Some members started posting things that were not relevant to the groups’ objectives, again other people posted photos of produce they do not have. What they posted looked excellent yet it was far from real.”

However, he contends that WhatsApp marketing is cheaper compared to making phone calls or writing SMS, but it is also limited to people whom you have their contacts or the 250 in a group the app allows.

Zidi Aluoch, who specialises in construction of bio-digesters and training on food safety protocols, says she is in an estate WhatsApp group where people buy and sell their products.

“Members post different commodities they have because they get ready market. People sell eggs, chicken, goats, and vegetables and non-food items enabling many to buy from trusted sources,” says Aluoch, who lives in Syokimau.

Since she deals with bio-digesters, she posts once a month photos of her products and has been able to get market.

Using the platform, however, comes with risks. In June last year, Joy Adhiambo a shopkeeper at Kemri Estate in Nairobi requested 10 crates of eggs at Sh300 each from a supplier in the estate through the platform.

“Everything seemed okay when the eggs were delivered but I later realised most of them had cracks.”
“Even if you trust the source because they are in your group, always verify the products,” she adds.

Mildred Atieno from Embakasi, who sells fish on WhatsApp concurs, noting that one should trust the product but verify as she once bought fish that went bad the next day from a supplier she had been highly recommended by group members.

Haggai Oduori, an Assistant Research Fellow at the Tegemeo Institute of Agricultural Policy and Development, Egerton University, says social media is a potential game-changer as far as marketing and reaching out to customers is concerned.

Evans Mwangi and Ann Lepishoi sell flowers at the City Market in Nairobi where they use WhatsApp to market the flowers. PHOTO | JEFF ANGOTE | NATION MEDIA GROUP

Besides the fact that it is affordable to use compared to making phones calls, it also allows one to reach many people at once, through the WhatsApp groups, and a buyer also sees photos of what he intends to buy, explains Oduori.

He adds that because WhatsApp groups are created by people within social circles, it becomes easier to build trust between buyers and sellers (because they know each other), thus, making marketing easier.

“You need not to worry about issues of quality and standards since the seller can send photos and videos of the commodities he sells,” he explained, pointing out that mischiefs (of group members sending photos uploaded from the internet instead of what they have in real sense) are only common in groups where members have not established trust among each other.

From crop health to prices of various commodities and connecting with a number of online buyers in real time, farmers across the country can now get immediate advice via WhatsApp groups.

Because smartphones are increasingly becoming more affordable, interactive app such as WhatsApp which comes with the phones have increased in popularity.

It is increasingly being embraced by smallholder farmers as an alternative marketing and adverting tool.

There is a new market -on WhatsApp Reviewed by samrack on February 10, 2017 .

Share thisFacebookTwitterPinterestEmailWhatsAppEvans Mwangi and Ann Lepishoi sell flowers at the City Market in Nairobi. They heavily rely on the WhatsApp platform, which is revolutionising online marketing, to market their flowers. PHOTO | JEFF ANGOTE | NATION MEDIA GROUP There is a new market -on WhatsApp Rosemary Mukhangabwe had a novel idea of selling fish in