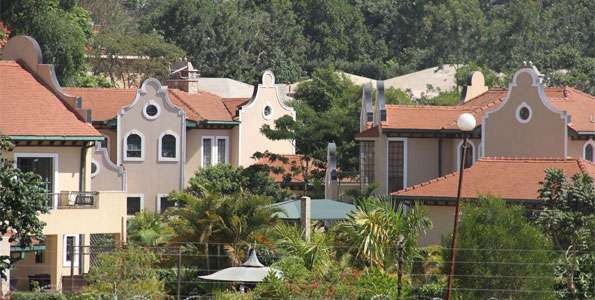 Houses in Runda. The residents insist the proposed development would irreversibly alter the character of the neighbourhood. PHOTO | FILE

Residents of the upmarket Runda estate in Nairobi have opposed the development of a multi-billion shilling luxury hotel associated with wealthy businessman Ahmed Jibril.

Officials of Runda Association (RA) claim the proposed 200-bed hotel and conference facility that Paddock Investments is developing in the affluent neighbourhood is in breach of security and requirements of controlled development.

“The proposed development is located in a gated residential community of single dwelling homes within Runda Estate. Each house sits on approximately 0.5 of an acre and the developments are controlled.

“The amalgamation and change of user is against zoning restrictions and is in breach of other applicable special conditions regulating the parent grant of Runda Estate,” the residents’ association chairman Isaac Gitoho said in a letter sent to Nairobi governor Evans Kidero, Nema director-general Geoffrey Wahungu and John Mwatu, the general manager, design and construction, at the Kenya Urban Roads Authority.

The letter says Mr Jibril, who is Foreign Affairs secretary Amina Mohammed’s brother, purchased 18 plots for which he sought amalgamation of (15 of the plots) and also sought change of user from residential to commercial (Hotel and Hotel suites).

“This negates all planning regulations, compromises security of the neighbourhood, will contribute to ground water pollution and cause degradation of the Runda residential roads,” said Mr Gitoho.

Paddock Investments plans to build the 200-bed hotel and a conference centre in Runda targeting business tourists and diplomats working in the neighbourhood such as the United Nations, the US and Canadian embassies.

Documents obtained by the Business Daily show that the Nairobi county government has cleared development of the hotel.

Runda residents have, however, maintained their opposition to the project questioning how the county government approved amalgamation of the 15 plots and change of user from residential to a hotel.

“We as an association make a resolution to petition the county government to stop construction of the hotel,” former anti-graft chief PLO Lumumba, who is a resident, said at a meeting held at Lord Eroll Hotel last week.

Mr Jibril, who identified himself as the chairman of Paddock Investments, however maintained that the planned investment is above board and would not breach the set standards as claimed by the residents.

“I have good intentions and the area needs such an investment. All the approvals have been above board,” he said, even as he disassociated the Foreign Affairs secretary from his investment activities.

He said the proposed hotel would eliminate the need to approve numerous medium-sized hotels and guesthouses that expose the area to serious security lapses.

Runda Association, however, says in a letter to the Ministry of Land and Mr Kidero that there was no public participation in approving the change of use for the plots purchased as required by law.

“The entire process of amalgamation and change of user is tainted by irregularities, absence of due process and is illegal. The developer is trying to build on approvals, which if available could only have been acquired irregularly and unlawfully,” the association argues.

They further argued that the rights of Runda residents to “live and determine the character of their neighbourhood is being suppressed.

The residents insist the proposed development would irreversibly alter the character of the neighbourhood and trigger other factors, which have no acceptable mitigation.

Separate correspondence, however, appears to show that divisions have rocked the bid by residents to oppose the project.

Mae Ridge Home Owners Association, a residential association  representing Mae Ridge, an area in Runda, in a letter written to the Ministry of Land have welcomed the development.

“The proposed construction of the new hotel will fall under Mae Ridge and we the committee having consulted extensively among ourselves have come to the conclusion that we do not have any objection to the development,” says the association headed by Vivo Energy (Kenya) managing director Polycarp Igathe, a resident.

The association had in an earlier letter sent by Ms Catherine Igathe on behalf of Mr Igathe opposed the development, saying the area “is already experiencing a lot of security incidences and we feel having a hotel will further aggravate the problem.”

“Again the area was set out as a residential area and any commercial development will disrupt peace and privacy of Mae Ridge Residents,” the Mae Ridge Association had earlier noted in an earlier letter written to the Runda Association.

Row rages over planned building of Runda hotel Reviewed by samrack on February 10, 2017 .

Share thisFacebookTwitterPinterestEmailWhatsAppHouses in Runda. The residents insist the proposed development would irreversibly alter the character of the neighbourhood. PHOTO | FILE Row rages over planned building of Runda hotel IN SUMMARY Runda residents claim the proposed 200-bed hotel and conference facility is in breach of security and requirements of controlled development. They claim that Mr