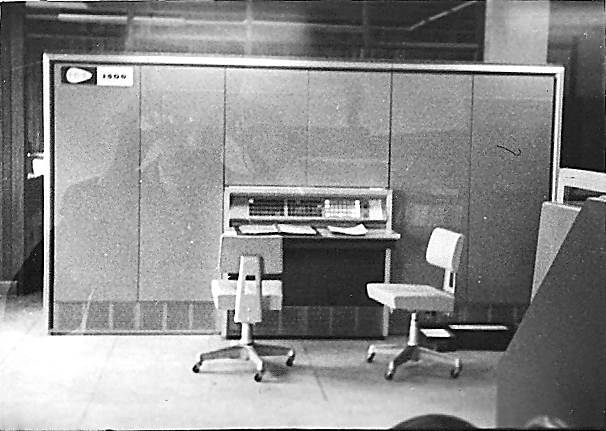 As part of the British Empire, East Africa used some of the earliest commercial computers ever made. One of them ended up at the bottom of the sea, and the other, mysteriously, in China.

In 1889, a man called Herman Hollerith was issued a patent for a machine he had invented. The machine used punched cards to do basic accounting jobs. Instead of typing the same facts and numbers over and over again to produce documents, the information could be recorded as holes in a punched card of about 18 cm long by 8 cm high. There were 80 columns of 12 rows in such a card where holes could be punched to represent letters or numbers. The holes were punched in the cards by a machine sort of like a typewriter with a keyboard.

Wherever there were “big” accounting jobs to do, these cards were created and then processed in Electrical Accounting Equipment (usually called EAM machines). These were electro-mechanical – they used no “electronics” such as valves or transistors – the latter had not even been invented yet. EAM machines were big heavy machines with electric motors (usually around 3 or 4 horsepower) turning lots of gears and wheels and clutches which could engage or disengage wheels from rotating shafts depending on the holes that were sensed in a card.

These machines could read cards, add up (or subtract)  numbers and print the results on paper – but they could not multiply or divide or make any kind of change in the way they worked to do a given job – there was no “program” – the instructions were wired into a removable panel that was plugged into the machine.

So for example, the local electrical company (East African Power & Light) had some thousands of cards containing the names and addresses of their customers, each card included the  customer number in addition to the name and address. Then each month, meter readers would visit the electricity meters and make a note of how much power had been used by a given customer – this was punched into another card together with the customer number. The two sets of cards (addresses and electricity usage) were then sorted together into one extended “deck of cards” and this was passed through a tabulator (the main kind of EAM machine) that then printed monthly statements and bills to be mailed to customers. There were different types of EAM machines – sorters (to sort the cards) reproducers (to copy some portion of information from one set of cards into another) collators (to interleave two sets of cards by (for example) matching them on the basis of customer number, and so forth.

If you are an enthusiast for 1950s computer hardware, you are probably out of luck when it comes to owning a machine of your own. Your best chance will be to join the staff of one of the various museums that preserve and operate these machines, at which you can indulge your passion to your heart’s content. But what if we told you that there is a 1950s computer available for pick-up at any time, to whoever is prepared to go and get it and has suitable transport? You’d be making plans straight away, wouldn’t you? The computer in question is real, but there’s a snag. It’s at the bottom of the Indian Ocean, just at the start of international waters off the coast of Kenya. The story of Kenya’s early computing and how the machine met its fate is the subject of a fascinating article from a year or two ago on owaahh.com that had us riveted from start to finish.

Like large state-owned enterprises worldwide, the Kenyan railway and power monopolies were among the first commercial customers for computing. In the final years of the British Empire, those were ordered from a company in London, International Computers & Tabulators, and it was their ICT1202 that served the railway company. The article goes into detail about the history of the company’s East African operation, the problems of running a tube-based computer in an African climate without air-conditioners, and the 1202’s demise and replacement. We’ll not spill the beans here on how the computer ended up on the seabed and how its replacement ended up being spirited away to China, for that you’ll have to read it all. It’s worth saying, the author also has a personal website in which he goes into much more detail about his experience with computers in the 1950s and ’60s.

Not had enough ancient computer tech? A couple of years ago we toured the primordial electronic computer, Colossus, and also took a look at the National Museum Of Computing that houses it.READ MORE

THE INTERESTING FATE OF KENYA’S FIRST COMPUTERS Reviewed by samrack on April 29, 2018 .

The console of the 1202 at EAR&H THE INTERESTING FATE OF KENYA’S FIRST COMPUTERS As part of the British Empire, East Africa used some of the earliest commercial computers ever made. One of them ended up at the bottom of the sea, and the other, mysteriously, in China. In 1889, a man called Herman Hollerith