The good, the bad, and the ugly of Thika Road 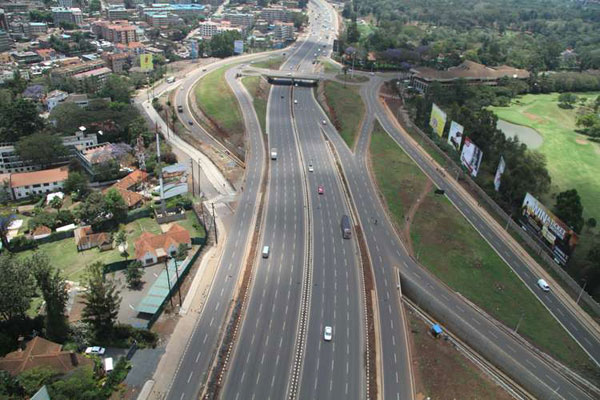 A section of Nairobi-Thika highway on November 16, 2012. The construction of the highway, which reduced commuting time between Thika town and the city, has undoubtedly led to an economic boom along the route. PHOTO | FILE

The good, the bad, and the ugly  of Thika Road

For many years the road from Nairobi to Thika Town, which lies about 40 kilometres north-east of the capital, was notorious for  traffic snarl ups. People avoided living anywhere along the route, and the economy in the adjacent areas was sluggish since few investors wanted to set up shop there.

However, since the road was widened and dubbed the Thika Superhighway, the whole route has undergone a radical facelift.

As soon as work began on the highway, investors, who knew the road would open up the area and make the journey to the city centre faster, started trooping to locations along the route. They put up residential homes and commercial buildings, which have completely changed the face of the route.

The wave of developments along Thika Road saw several residential estates come up, and not long after, shopping malls to cater for the  new residents. The malls have shops that offer practically all the goods available at supermarkets in the city centre, so residents no longer have to go all the way to town for services such as banking and treatment, or to get help from outlets such as mobile network providers. The malls also come with food courts, entertainment and recreation centres, and children’s entertainment spots, among other additional services.

With the increased activity, street lighting was improved in many areas, creating a better atmosphere for business. So far, there are seven malls along the superhighway, some already operational, while others are still under construction. They include Garden City Mall, Thika Road Mall (TRM), Mountain Mall, Juja City Mall, Vintage Mall, Spur Mall in Ruiru, and University Mall at Kenyatta University.

As these developments have been taking place, the trickle-down effect has been felt in the older economic centres and estates close to the highway such as Ruaraka, Roysambu, Kasarani, Garden estate, Ruiru, Juja and Kahawa Sukari, which have also registered considerable growth.

According to government statistics, these areas are home to more than a million residents. In addition, a number of government agencies and institutions are located close to the 50-kilometre road. They include the  National Youth Service in Ruaraka, the Kenya Institute of Education, the Kenya Institute of Survey and Mapping, the General Service Unit headquarters, and Kahawa military barracks.

The construction of the highway, which reduced the commuting time between Thika Town and the city, has undoubtedly led to an economic boom along the route.

Landlords, estate agents, service providers, big and small traders have all been doing booming business. What’s more, some of the businesses introduced previously rare services found  only in the city centre, such as delis, thereby making life a lot easier for the residents.

But all these developments have come at a price.

“Business has since become very expensive in areas adjacent to the highway, with the smallest residential space in areas like Hunters and Sunton estates in Kasarani, whose residents are mainly middle-income earners, now going for as much as Sh18,000 for a single room, says Mr Paul Ochieng’, who runs a business in the area. And that is for apartments located a distance from the main road. Those nearer the road cost more.

Residential housing has also become big business. Before the completion of the superhighway and the opening of TRM, most residential blocks were only two or three storeys. But with increased demand for housing in the area, some developers are putting up seven-storey apartment blocks.

For estates further away from the main road, such as those on the Kasarani-Mwiki Road, plots measuring 60 by 40 feet are going for at least Sh1.6million, up from around Sh.1.1 million two years ago, says Mr King’ori  Njoki, of Yali Enterprise, an estate agent that sells land in the area.

Plots of a similar size but far from the main road are going for at least Sh800,000, he adds.

This trend has sent the rents for residential property skyrocketing. A two-bedroom apartment that was going for a monthly rent of Sh15,000 two years ago is now going for between Sh20,000 and Sh25,000.

In areas such as Zimmerman, Kahawa West, Hunters and Sunton in the Roysambu and Kasarani areas, one-bedroom apartments that were being rented out for Sh8,000 two years ago are now going for between Sh12,000 and Sh13,000 per month.

Ayub Osiemo, a caretaker at Sunton Estate, says he has no problem finding tenants and does  not even have to advertise when he has a vacant house since there are many people always looking for houses.

“Rarely will you find a vacant house in the estate, apart from the ones under construction,” he offers.

But while most of the developments seem to be positive for businesses, the expansion of Thika Road has brought with it a negative and less-talked-about problem: services in many areas along the route  are seriously overstretched because their expansion has not been commensurate with the area’s population growth.

Many of the middle- to-lower-income group estates such as Roysambu, Zimmerman, Kasarani-Mwiki and Githurai now have huge heaps of garbage, blocked drains, overflowing sewers and unreliable water and electricity supply.

Road networks to most of these estates are also in very bad shape. The Kasarani-Mwiki Road, which also provides a link from the Thika Superhighway to Njiru, Ruai, and Kayole estates, is currently undergoing rehabilitation, but that was only after the area’s residents demonstrated in September last year.

The area has also been experiencing chock-a-block traffic during morning and evening rush hours.

“I have lived in Kasarani since 2004 when the area was sparsely populated. It is unbelievable how overcrowded it has become. Though garbage collection has improved because there are youth groups collecting it, there is no garbage collection point, so some open spaces have been converted into dumpsites,” says Mrs Agnes Kamau.

Drainage is also a problem as the drains are clogged. In addition, there is the problem of sewerage. Indeed, one doesn’t have to walk far to see an overflowing sewer burst.

And although goods and services are easily available, the area has become very dirty and noisy.

High-rise apartments have also become the investment of choice in the area. This has seen spaces where beautiful, family-style bungalows once stood now “hosting” multi-storey  buildings after the bungalows were brought down to make room for them, while the remaining ones are sandwiched between these tall buildings, adds Mrs Kamau.

Mwangi Murigi, a businessman in Mwiki, says most estates are crying for a thorough cleaning.

“I am afraid of buying cooked  food from the street vendors because I don’t know the conditions in which they prepare them. It is not unusual to see ready food vendors hawking foodstuff next to a heap of garbage or a clogged drain. The only things I do not like about this area is the poor garbage collection, the blocked drains and overflowing sewers. Otherwise, it is a good place to live,” Mr Murigi says.

“It is time the Nairobi County government started offering us better services with regard to  garbage collection, as well maintenance of the sewerage and  drainage, since more and more high-rise apartments are coming up in the area. This means the services will be even more overstretched,” he says.

But it is is not all doom and gloom. The residents of Ngumba estate and its environs  found themselves the  beneficiaries of a tarmacked access road after the developers of Garden City Shopping Mall upgraded a dirt road to facilitate access to the mall  for those entering it from Exit Seven of the superhighway.

Although the entrance is 50 metres from the superhighway, the developers upgraded the entire two kilometres into Ngumba Estate. Meanwhile, Murema Primary School on the Kasarani-Mwiki Road had an ablution block built  by the  developers of Garden City  Mall.

Share thisFacebookTwitterPinterestEmailWhatsAppA section of Nairobi-Thika highway on November 16, 2012. The construction of the highway, which reduced commuting time between Thika town and the city, has undoubtedly led to an economic boom along the route. PHOTO | FILE The good, the bad, and the ugly  of Thika Road For many years the road from Nairobi