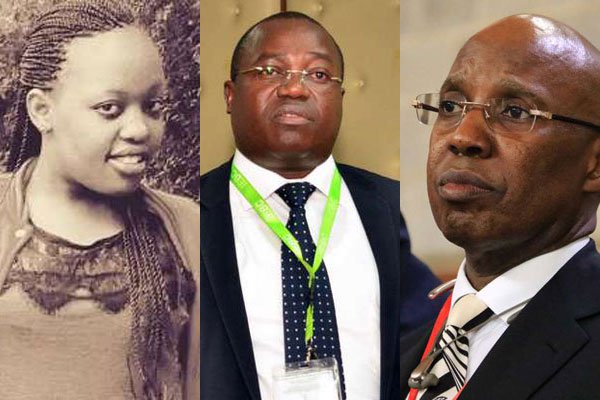 From left: The late Carol Ngumbu, the late Chris Msando and businessman Jimi Wanjigi. Their stories were among the most popular on Nation website in 2017. PHOTOS | FILE | NATION MEDIA GROUP

In a year defined by politics, scandals and high-profile deaths, it is only natural that those topics dominate this list of the Nation’s most-read stories over the past year.

From the shocking deaths of Security Minister Joseph Nkaissery and ICT Manager Chris Msando to a woman’s confession on why she had an extra marital affair, these are the 20 most popular stories on award-winning www.nation.co.ke in 2017.

We limited the list to one news story per event, so ongoing coverage of one topic would not dominate.

The woman who was found dead together with IEBC ICT Manager Chris Msando was identified as Carol Ngumbu.

The 21-year-old woman hailed from Gachie, Kiambu County, and had just completed her studies at the Karen campus of Kenya Medical Training College.
Read more.

Revealed: Chilling details of bullying and torture meted out on Form One students by their seniors at Alliance High School.

The bullying is carried out during “action nights” and “induction sessions” masterminded by prefects in the full knowledge of the administration.
Read more.

3. How Jubilee tried to arm-twist judges to change mind

At the time the six Supreme Court judges emerged to tell the anxious public of their decision concerning the presidential election petition on Friday after 11am, a lot had taken place as some people made concerted efforts to influence the decision.
Read more.

He is by far the most feared man in Kenya: the US embassy barred him from the US because, in part, it believed he had threatened to kill whistleblower John Githongo.
His influence in the security sector, military, parastatals, Parliament, mainline civil service and the media — he keeps lists of people he is believed to have paid off — is comparable to that of Edgar Hoover, the former director of the Federal Bureau of Investigations, who survived in office through intimidation.
Read more.

5. ‘I cheated to save my marriage’

Jackline Mwende, the woman who hit the headlines last year after her husband chopped off her hands because she could not bear him a child, is now heavily pregnant, and proudly so.
Read more.

IEBC Commissioner Roselyn Akombe announces her resignation in a statement sent from New York, where she was based as she worked for the UN before she took the poll agency job.
Read more.

Igembe South MP John Paul Mwirigi did what most Kenyans would say does not befit the status of an MP.

The 23-year-old travelled from Meru to Nairobi by matatu to attend the induction for members of the National Assembly.
Read more.

Embattled elections boss Ezra Chiloba took a three-week break and was away during the October 26 repeat presidential election.
Mr Chiloba took a “personal decision to be away in order to build confidence in stakeholders” who had complained about commission officials.
Read more.

The Kenyan military in November quietly effected key changes in its top ranks, a departure from a recent trend where the defence forces were slowly opening up to greater public scrutiny.
Read more.

As National Super Alliance (Nasa) MPs crowded about in front of the cameras after the decision of the Supreme Court, Suba North MP Millie Odhiambo was on another level.
Read more.

13. Nasa chiefs split over plans to swear in Raila

Top leaders of the National Super Alliance are split over whether or not Raila Odinga should be sworn-in as the “people’s president”.
Read more.

The two MPs fought before they were separated by Parliament staff.
Read more.

15. Uhuru: When I will talk with Raila

17. Uhuru takes lead in early vote count
President Uhuru Kenyatta takes an early lead with more than half the votes counted, as challenger Raila Odinga disputes the results being released by the Independent Electoral and Boundaries Commission.
Read more.

The man who captured public attention after he claimed to have witnessed two high profile crashes in a span of one week has a criminal record.
Read more.

Former ICC Prosecutor Luis Moreno Ocampo is in the eye of the storm that has hit the international crimes court in The Hague.

From left: The late Carol Ngumbu, the late Chris Msando and businessman Jimi Wanjigi. Their stories were among the most popular on Nation website in 2017. PHOTOS | FILE | NATION MEDIA GROUP  The 20 most popular stories on ‘Nation’ website in 2017 In a year defined by politics, scandals and high-profile deaths, it is