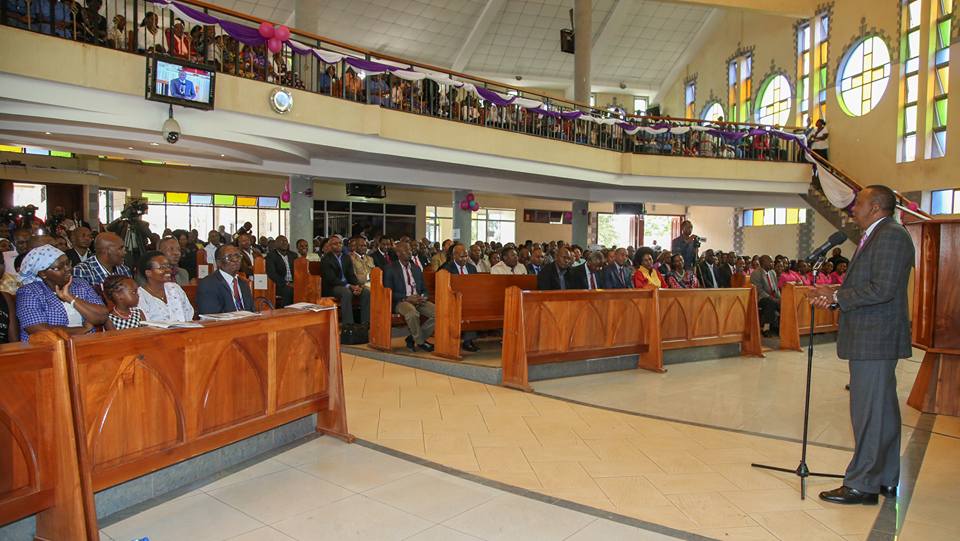 President Uhuru Kenyatta today thanked Kenyans for their prayers, which he said contributed to the collapse of the ICC case against Deputy President William Ruto.

The President expressed his joy at the end of the cases that faced him, Deputy President William Ruto and Joshua Sang adding that Kenyans now have a better opportunity to foster unity.

“It is God and the prayers of millions of Kenyans that have helped us reach where we have reached today,” the President said.

President Kenyatta was speaking at the ACK St Andrew’s Cathedral in Thika, where he joined worshippers.

At the same time, he assured that Kenya’s banking sector is stable and safe. He said mismanagement by unscrupulous individuals in the financial sector will not be allowed to hurt depositors.

“Those who run banks will not be allowed to steal from depositors,” said the President.

He gave an assurance that depositors will not lose their money: “It will be paid by those owners who took massive loans and did not pay.”

The Head of State called on Kenyans to unite and shun politics of hatred.

“Now is the time to unite. Let us stop the politics of division, tribalism and hatred,” said the President. “Kenya needs all of us and no one can build the country on his or her own.”

President Kenyatta called for peace and understanding, saying political or religious differences should not be the basis of conflict.

The President also urged politicians to be respectful and to desist from insults and the use of foul language.

“Heshima sio utumwa (It costs you nothing to respect others). We can have differences of opinion, but there is no need to insult others,” he said.

President Kenyatta spoke after attending Sunday service where he was joined by local leaders and residents.

The President later presided over a fundraising to raise money for the Church to be self-sustaining.

The event will give thanks for the collapse of the ICC cases.

Senate Deputy Speaker Kembi Gitura equated the end of ICC cases at The Hague to the “end of the shackles of colonialism”.

Nominated Senator Beatrice Elachi said the collapse of the ICC cases has opened a new chapter of peace and reconciliation.

Kiambu Senator Kimani Wamatangi thanked the national government for the projects in the county. He cited the expansion of the fresh produce market and water projects in Thika Town, and sewerage systems in Ruiru and Juja.

Thika Town MP Alice Ng’ang’a thanked the President for projects in her constituency.

Thank you for anti-ICC prayers, President tells Kenyans Reviewed by samrack on April 9, 2016 .