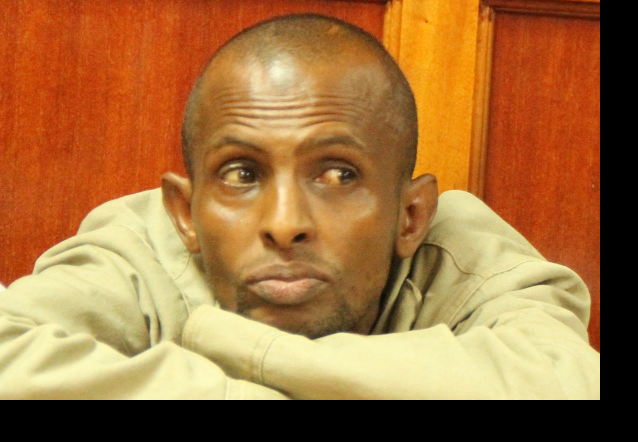 POLICE have arrested a man they believe was conducting surveillance on President Uhuru Kenyatta’s rural home for purposes of terrorism, but the suspect says he was lost.

Said Mire Siyad (above) was found in Uhuru’s compound in Ichaweri, Gatundu South District, on Tuesday.

He was arraigned before city magistrate Eddah Agade yesterday, but was not required to plead as police asked for more time to carry out more investigations.

The Anti-Terror Police Unit (ATPU) believe he was mapping the area to plan an attack.

An affidavit sworn by Jackson Chacha, a senior police officer and which was tabled before the magistrate, said Mire was arrested on April 21, and handed over to ATPU on April 22.

According to Chacha, the suspect could not explain his reasons for being at the President’s rural residence. He also could not clarify how he managed to enter the home, which is always guarded by armed officers.

In court yesterday, Mire fumbled when asked by the magistrate if he had objections to an application filed by the ATPU seeking to hold him in custody to allow investigators more time.

“I have no problem, let them do their investigations, I am not a terrorist. I was only there because I was looking for someone to give me directions,” he said.

Mire was arraigned alongside another terror suspect, Omar Said Ahmed, who the ATPU believes is behind youth radicalisation programmes in Nairobi.

The ATPU said Ahmed had taken his son to Somalia to join the al Shabaab terror group.

Chacha told the court that his office requires 15 more days to carry out further investigations before it presses charges on the two.

The officer said investigators require detailed extraction of mobile phone records to ascertain the nature of communication and contact persons.

“According to the brief investigations so far carried out, the two have other associates who are yet to be arrested. We believe they are engaging in organised criminal activities in and out of the country. I pray this court remands the two for 15 days at Kilimani police station,” Chacha said.

The application was allowed and the two will be brought back to court on May 5.

Six other terrorism suspects, among them a couple, were arraigned in the same court. They too were not required to plead to the charges.

Abdikadir Maalim Hussein, Ahmednoor Abdi Adan, and Mohamed Hussein Maalim were arrested by members of the public at Gikomba Market on Tuesday and handed over to ATPU when their behaviour at the market became suspicious.

POLICE have arrested a man they believe was conducting surveillance on President Uhuru Kenyatta’s rural home for purposes of terrorism, but the suspect says he was lost. Said Mire Siyad (above) was found in Uhuru’s compound in Ichaweri, Gatundu South District, on Tuesday. He was arraigned before city magistrate Eddah Agade yesterday, but was not