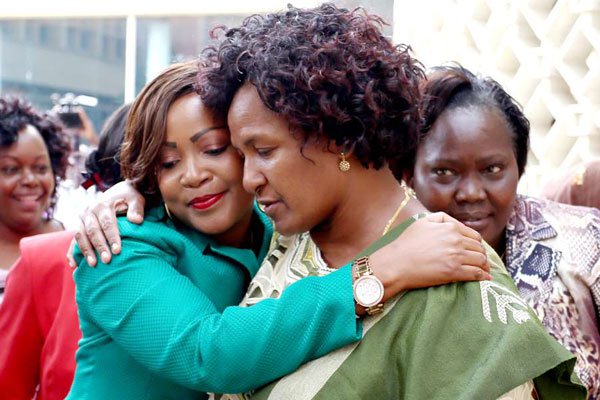 President Uhuru Kenyatta’s long-standing friend and Jubilee Party lead women mobiliser at the Coast, Dr Naomi Shaban, has quit the party, dealing a huge blow to the outfit’s forays in the region.

The Taveta MP, in her resignation letter dated April 8, cited “unavoidable circumstances” as the reason for her departure.

“I have seen tell-tale signs of being rigged out and I could not wait to find out at the ballot,” Dr Shaban, who is also the National Assembly Deputy Majority Leader, told the Nation.

“I am now very tired. I have complained for a very long time and no one seems to care. Now, my only option is to move out.”

However, she has been listed alongside Naomi Ndisha, and Mike Hamsi as Jubilee Party Taveta parliamentary aspirants.

Dr Shaban had cut a figure as one of the most experienced women politicians in Taita Taveta County.

2002 ELECTIONS
In 2013, she braved an Orange Democratic Movement (ODM) wave to be re-elected on President Kenyatta’s The National Alliance (TNA) ticket, which she had promoted with her polished Swahili.

She had joined a well-organised group of politicians to market the Jubilee duo (Uhuru and Ruto), whom she described as progressive.

But her dalliance and friendship with President Kenyatta did not start in 2013.

In 2002, Dr Shaban, then launching her career, beat an anti-Kanu tide to be elected as Taita Taveta MP, when Mr Kenyatta was running for President against Mwai Kibaki of Narc.

In 2007, when Mr Kenyatta had joined forces with President Kibaki, Dr Shaban stuck by him, and was, as a reward for her loyalty, appointed as Minister of Special programmes before being moved to the Gender docket.

UHURU’S RE-ELECTION
Dr Shaban would again capture her seat in 2013 in a county where the governor, senator, woman representative, four of the five MPs and a majority of the members of the county assembly were elected on an ODM ticket.

So why would such a person, so close to the center of power, move out of Jubilee at a time when the President badly needs a strong candidate at the Coast to help him secure enough votes to win a second term?

In the interview, she refused to commit whether she will back his re-election, but was careful not to blame him for her exit.

“The President is not involved (in party politics). He is busy with State matters. It is people in the party who do not listen,” she said.

PEOPLE’S WILL
Her next move, she said, will only be decided by her constituents.

“I will speak to my people, and only they will decide where we go from here,” she said.

In her three-sentence letter of resignation to Jubilee Party Secretary General Raphael Tuju, Dr Shaban was careful not to blame anyone for her exit.

“I wish Jubilee Party all the best in the upcoming election,” she wrote.

Further, Dr Shaban said her constituents had forced her to rescind her decision to retire from politics, a decision she had announced last year.

When made the pronouncement, she maintained that her support for President Kenyatta will not wane.