New education system to be tested in all counties next month 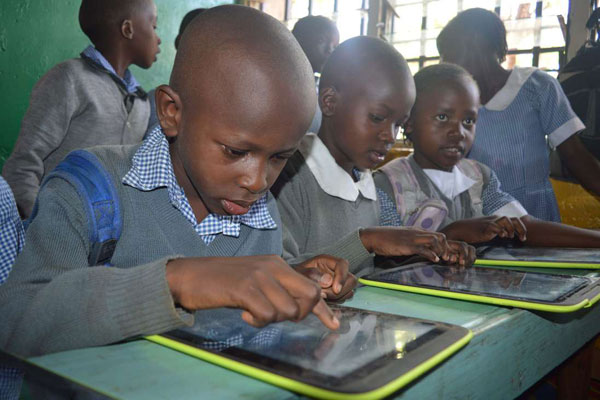 Pupils at Kosawo Primary school in Kisumu use tablets on March 1, 2017. A pilot programme for the proposed education curriculum will be launched this week . PHOTO | ONDARI OGEGA | NATION MEDIA GROUP

New education system to be tested in all counties next month

A pilot programme for the proposed education curriculum will be launched this week with training for headteachers of selected schools from all the 47 counties.

It will be carried out at pre-primary and lower primary levels, referred to as “early years” under the new curriculum, which comprises five levels — pre-primary one and two and grades one to three.

Overall, the new system has three tiers: Early years, consisting of Pre-primary One to Grade Three; middle-school, comprising Grades Four to Nine; and senior school, running from Grade 10 to 12.

The Thursday launch at Kenya Institute of Curriculum Development (KICD) will be presided over by Education Cabinet Secretary Fred Matiang’i.

It will be followed by training of teachers in the pilot schools and classes, whose outcomes will be used to revise and fine-tune the curriculum before rollout in January.

In January this year, the Basic Education Curriculum Framework (BECF) was adopted at a national conference on curriculum attended by 659 stakeholders.

The proposal to scrap 8-4-4 was first contained in a 2012 report by a taskforce chaired by Professor Douglas Odhiambo, which recommended a 2-6-3-3-3 system.

The pilot is a major step in the adaptation of the new curriculum, which seeks to radically change the country’s education system in more than 30 years as it replaced the disgraced 8-4-4.

According to the plan drawn by KICD, the pilot targets 470 schools, 10 in each of the 47 counties: Five each from pre-primary and primary.

It aims at testing the feasibility and validity of the new curriculum that shifts learning from mere memory and recitation of facts to application of knowledge and skills.

“This pilot study will be carried out to test the feasibility and validity of the planned curriculum designs, teacher preparation and assessment models in different contexts and levels,” says a KICD report on the pilot programme.

A new proposed format of basic education has been endorsed opening the way to the design of a new curriculum, the first since 1985.

“The competency curriculum will require well prepared teachers who can understand and internalise the new approaches in the intended curriculum, the way it will be implemented curriculum (expressed by real life in schools and classroom practices), and the attained curriculum as expressed by learners’ experiences.”

KICD Director Julius Jwan says adequate preparations have been put in place for the pilot, which will be effectively rolled out in May, when schools re-open for the second term.

Mr Jwan said KICD has developed the syllabi and teaching and learning materials for the lower tier while training for the teachers of the pilot schools will follow soon after the headteachers’ sensitisation training.

The pilot schools capture the geographical, cultural and demographic diversities of the country, he said, adding that the sample is representative of what obtains across the counties.

The pilot is aimed at establishing the adequacy of the content and learning and in particular, how they enhance the overall goal of equipping learners with core competencies.

It also seeks to assess the effectiveness of the proposed teaching methods that emphasise skills learning rather than theory manifested in mastery of facts but inability to apply them.

Also, the pilot will interrogate whether the time allocated for various subjects is adequate and realistic and the type of instructional materials required to equip learners with competencies in various disciplines.

A critical element to be tested during the pilot is the mode of assessment to be applied. Unlike the current system, where tests are administered at various levels and learners sit national examinations at the end of primary and secondary levels, the new curriculum de-emphasises exams.

Instead, learners are assessed continuously through practical assignments, through which they demonstrate whether or not they have learnt what has been taught.

New education system to be tested in all counties next month Reviewed by samrack on April 16, 2017 .