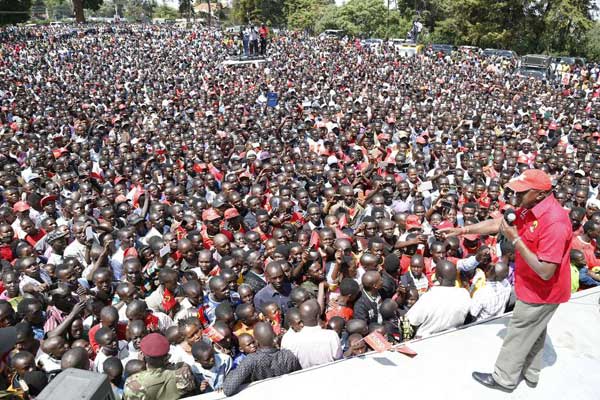 President Uhuru Kenyatta has warned judges against frustrating the Independent Electoral and Boundaries Commission (IEBC) in order not to conduct the August 8 General Election.

The President said he would not accept any attempt to postpone the polls.

Speaking at Kabartonjo Primary School in Baringo County on Sunday, President Kenyatta said the Judiciary should not take them for fools for being silent as the courts make decisions that could lead to the postponement of the elections.

He said they will no longer keep silent as the Judiciary continues to put up obstacles towards the preparations for the coming polls.

“I want to tell those in the courts that because we have respected you for a long time we are not fools.

We cannot accept the courts to be used by those not interested in the elections to frustrate IEBC,” said the President.

He said that they had kept silent in order not to be seen to be interfering with the independence of another arm of government but warned that things would not be the same again.

Responding to the recent High Court ruling that barred IEBC from contracting Dubai-based Al Ghurair company from printing the presidential ballots, the President said it was puzzling that the electoral agency had been allowed to go ahead with printing ballot papers for other elective positions except for the president.

“They don’t have a problem with the printing of ballot papers for MCA, MP, Woman Rep, Senator and governor but they have an issue with those for the President. Do they think we are fools?” he posed.

Deputy President William Ruto said they would not accept any attempt by their opponents to use the courts to hold the electoral agency at ransom.

He criticised the Chief Justice David Maraga for asking the IEBC not to print the ballot papers until court cases were determined.

“When the Chief Justice tells the IEBC not to print papers because there are court cases what does he know that we do not know, does he know how the cases will be decided,” said Mr Ruto.

Last week, CJ Maraga warned IEBC against printing ballot papers before petitions facing some of the nominees were fully adjudicated upon.

Elgeyo-Marakwet Senator Kipchumba Murkomen said the judiciary should be ready to be held responsible in case elections fail to take place.

“The CJ should decide whether he wants to run the country through the judiciary. If anything happens in this country on or after elections, the judiciary should take full responsibility,” said the senator.

The CJ, in his Twitter handle on Sunday, termed the accusations as unfortunate.

” I would not ordinarily respond to statements made by politicians in the course of campaign activities, but these accusations are particularly unfortunate, based that they are on completely wrong premises.”

The CJ said at no time had he asked the IEBC not to proceed with ballot printing, contrary to statements the Deputy President William Ruto at a rally in Baringo on Sunday.

“The comments I made in Mombasa and elsewhere, which were either deliberately or inadvertently taken out of context, were in reference to the courts’ efforts to expeditiously clear the numerous petitions arising from the party primaries in order not to inconvenience the printing of ballot papers,” said Maraga.

The CJ added: ” I have always been at the forefront of defending the cardinal principle of decisional independence of judges, and at no time have I ever directed any judge or judicial officer on how to determine the cases before them.”