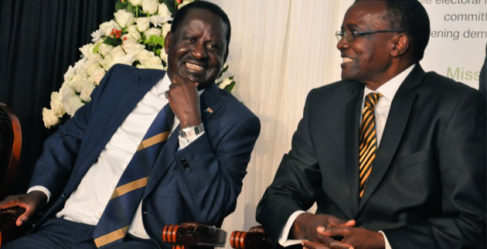 Jubilee leaders have accused him of leaning towards the Opposition

Maraga was responding to statements made by President Uhuru Kenyatta and his Deputy President William Ruto and other top jubilee leaders in Kabartonjo, Baringo who accused him of taking sides in what is seen as a move to lean towards the opposition.

“At no time did I ask the IEBC not to proceed with ballot printing, contrary to statements by Deputy President William Ruto and other politicians at the Baringo rally,” he said in a statement sent to newsrooms on Sunday night.

On the contrary, he said, “the comments I made in Mombasa and elsewhere, which were either deliberately or inadvertently taken out of context, were in reference to the courts’ efforts to expeditiously clear the numerous petitions arising from the party primaries in order not to inconvenience the printing of ballot papers.”

While addressing a rally in Kabartonjo in Baringo County on Sunday, President Kenyatta and DP Ruto took issue with a recent statement by the Chief Justice, alleging that he directed the electoral body not to print ballots papers until a case that was in court was decided.

They said the CJ’s statement was quickly followed by a court order asking the IEBC not to proceed with the printing of Presidential ballot papers.

President Kenyatta, who spoke at Kabartonjo, said the orders being issued by the courts appear to be designed to scuttle the election and it was an unacceptable affair.

“You cannot claim independence and use it to interfere with the functioning of the Executive and other arms of Government,” said the President, adding that the outcome of the election will be decided by the people and not the courts.

“We have respected you for too long but do not take our silence as cowardice. We will not allow our competitors to use the courts to intimidate the IEBC,” said the President.

The Head of State said Kenyans will go to the polls on August 8 whether the opposition is ready or not and despite the constant threats of violence from leading opposition figures.

He assured Kenyans that the elections will be free and fair and that the Government will ensure they take place in a peaceful environment.
The President said the constant allegations by the opposition that the Jubilee Government wants to rig elections were false and were contradicted by facts.

“This is the first government that is serving a term that is less than five years. If we wanted to rig elections we would have started by demanding that we serve five years but we have accepted that because we want democracy to prevail,” said the President.

The Deputy President said the IEBC should play its Constitutional role to ensure election takes place on August 8.

“Do not conspire with those who are not ready for elections. The IEBC must respect its Constitutional duty to hold elections as stipulated,” said the DP.

The DP also challenged the CJ to tell Kenyans why he publicly gave directions to the IEBC not to print ballot papers even before the Judges handling an election related case made their ruling.

“We are asking the CJ, what does it mean when the CJ gives directions that the IEBC should not print ballot papers?” said the DP.

But Maraga has denied the claims, insisting the Judiciary is independent and cannot be manipulated by anyone, including himself.

The exchange of words stems from a ruling issued by three judge bench of the High Court which nullified a tender issued by IEBC to DubaI-based printing company Al Ghurair, on grounds that procurement procedures were flouted and that there was no public participation.

IEBC Chairman has said the commission will fully comply with the ruling by commencing the tender afresh, but will file an application at the Appeals Court to seek clarity on public participation “because it is not outlined in public procurement laws..